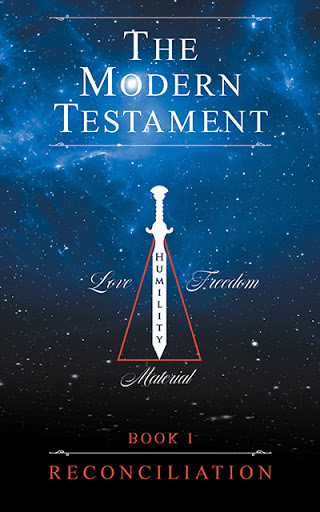 The Modern Testament
Book I - Reconciliation
by Transcribed from Inspiration

The Modern Testament (TMT), Book I, Reconciliation is the first book in a series with a purpose of providing tangibility to spirituality and modernity to traditional religion. It is written for those wishing to have a connection with a higher power but without the complexity, inequality, guilt and partial obsolescence of traditional religious doctrines relative to modern times. Herein, the reader is offered a path to understand that the energy in the Universe is the essence of God and that the Universe is God’s being through which God’s essence can be felt and of which all life in the Universe is created. With this understanding, the reader can interpret their individual and unique, physical connection to God. It is because of this energy and individual connection to God that we innately feel the presence of a higher power. This higher power is that of a non-judging and non-gendered God whose offspring and true prophet is the common mother of all species of life hereon: Our planet, Earth.

While this God is the same God of whom Abraham, Moses, Jesus Christ, Mohammed and Martin Luther King, Jr were all prophets, TMT advocates that the planet Earth is God’s true prophet through whom we can have a personal connection with God, and relegates all other traditional religious prophets to that of special prophets of the Earth, but not directly of God. TMT also advocates that the Earth spreads the grace of God, which it receives in the form of heat and light from the sun, to all life on Earth both equally and constantly. Thus, humankind is not the only special species in the eyes of the Earth and God.

In TMT, readers will learn how to reconcile their emotional selves with the ultimate mother of all of us: our precious planet. This reconciliation can happen with a a plan infused with humility and absent human arrogance or entitlement. Through the lens of humility, the reader can come to understand the value of diversity and the pain of gender and all other inequality that’s intrinsic in traditional religious doctrines. They’ll also be shown that de-emphasizing material wealth and re-emphasizing the wealth of love and the freedom to pursue it, while slowing the growth of the human population, is the path to RECONCILIATION with the Earth and with God.

The author has dealt with a profound loss of love through death and divorce in his lifetime. Each time, he sought counsel through a Christian faith in which he had been baptized and raised. However, he found no peace there. He found the advice and fellowship there to be self serving of the religion, rife with hypocrisy and rigid in outdated scripture. But he was able to discover peace and inspiration by embracing the humility learned through loss and by communing with the Earth from where he found the pulse of humility that enabled him to truly feel and appreciate the love of God.