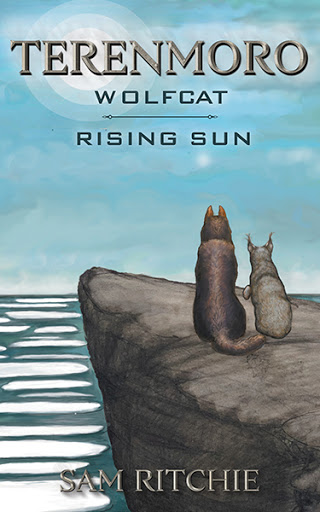 At only three moons of age, Hasefi, a young lynx, witnesses the ambush and annihilation of her tribe by a rogue wolfpack lead by the black wolf Sal. Not even the magic of the gifted in her tribe could protect them. Her uncle’s dying wish was that she would continue their mission to follow the rising sun to their home. But first Hasefi will have to overcome the tragedy of her tribe's death. Will she have to face Sal? Is there anyone she can trust?

Terenmoro Wolfcat: Rising Sun follows Hasefi as she struggles to survive alone in the wild, striving to complete her mission against insurmountable odds. Help comes from an unlikely companion, a lone wolf named Kolahn, who joins her trek through dangerous territory to finish Hasefi's quest.

Your clan judges you by your fur with a story judged by action.

Rising Sun demonstrates the power of loyalty in friendship and how that bond can go beyond one's own kind. Sometimes it's hard to find people we can count on, especially when the idea of who and what people are is changing. Rising Sun shows that there's no need for a big circle of friends so long as you have that one who will support you through anything and offer unconditional love.

Sam Ritchie lives and writes in St. Albert, Alberta with his supportive grandma and Spero, his cat with a fascination for choosing just the right words to fit the story. When not writing, Sam can be found by the river where both he and his mind can wander.