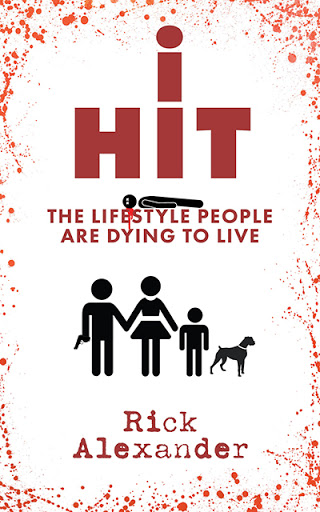 Damon is a normal man, with a wife, a child, and a love of hunting. He also happens to be a hitman at the centre of a never-ending gang war. From Italian crime families moving coke across the border to Polish contractors just trying to stay above water, the players are in this to win and the stakes are life and death. Everyone has a different point of view, and everyone has a way out. The police have a front-row seat to the nightmare that haunts the city, and they’re doing everything they can to catch the killers. While Damon tries to balance work and family, good cops work to track him down.

i Hit, is a fictional story drawn from the real life experiences of a man who was raised in this troubled world. Alexander brings the realism of non-fiction to this invented tale of gang violence and revenge. Readers will be thrilled by the story of how so many seemingly different people end up in violent situations and deadly danger. It’s a new style of fiction that makes the hitman more human, and answers the age old question of what draws someone into a life of crime.

“The Author has a wide open mind. I’m not sure what happened; Maybe he hit his head while growing up, or he lived next to the Mob and spied on them as a child.”

“I clearly pictured the scenes, it felt real.”

Richard Alexander is a fifth-generation resident of BC. While his grandfather built the Shady Creek Church, his father took a different path, becoming the president of the Devil’s Army and a suspected hitman. Alexander has lost more family friends to homicide than he can count, and heard many murder stories since his childhood.

Alexander works in real estate, and has been an active private pilot of fix wings for over 15 years. A motorcycle enthusiast, he’s owned four motorcycles and ridden an average of 10,000 km each year. He has travelled all over the world, even running a business in a small South American country. He is an active moose hunter and member of a pistol shooting club. Alexander lives in the Lower Mainland of B.C with his wife and kids, where he practices amateur photography and traditional martial arts.