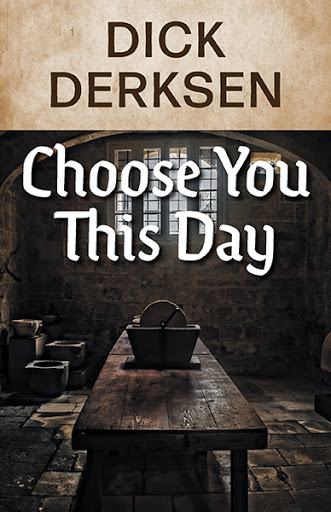 Choose You This Day
by Dick Derksen

The Derksen family has come to Wuestenfelde as refugees from Friesland, Mennonites that have fled the persecution of all Anabaptists, primarily due to the debacle of their takeover of Muenster in north Germany. Misguided followers of Melchior Hoffmann, a bombastic preacher that everyone loved to hate had taken over this city to make it the beginning of the Kingdom of Christ on earth, with Jan of Leyden serving as King David. Menno Simon, a priest in Friesland, whose brother had been burned to death when he and 300 other Anabaptists fled to a monastery for refuge, decided that this was not the way to fulfill the scriptures, so he converted to Anabaptism, too, and became the spiritual guide to a movement that eventually bore his name – first Mennists, then Mennonites. Baron von Ahlefeld took them into his estate north of Hamburg, at Bad Oldesloe, where he gave them the outlying village of Wuestenfelde for themselves. Menno Simon joins them there. Jacob Derksen, the fictitious progenitor of the author’s family, practices his trade of bricklaying on the baron’s estate. His family is growing up, and each one becomes a major contributor to the story of the Mennonite struggle for survival and self-consciousness. Jacob Jr., one of his sons begins to feature in the story as his successor, and eventually the story centers around him, his romance, and his dedication to the faith of his father. Historically, this story incorporates many of the situations common to the age – the middle of the Sixteenth Century, as the Reformation has reached its peak – persecution, martyrdom, plagues and common illnesses that took their toll on the general population. Baron von Ahlefeld aided the story to its conclusion.

Dick Derksen was raised in a Russian Mennonite environment, beginning in Manitoba and ending in British Columbia. He is the oldest of fifteen children. After working in the family sawmill and farm until adulthood, he graduated from Prairie Bible Institute and then the University of Calgary. He taught junior high band and social studies for six years, while also directing Whispering Pines Bible Camp. He spent the next 31 years teaching and administering in two schools for missionary children in Europe. During the last 15 years he also completed his MA and did the coursework for his doctorate in Education at University of Bath, England. He retired back to Calgary in 2007, and soon began researching and writing this series of historical fiction novels.