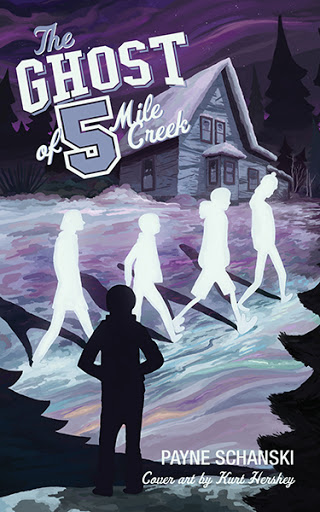 The Ghost of 5 Mile Creek
by Payne Schanski

For fifteen-year-old JB, life couldn’t get much worse.

He’s been grounded for six months after making a huge mistake that’s ruined his reputation, and now his life consists of going to school and coming straight home: no more basketball games or adventures with his friends. The word “fun” seems to have been erased from his life, and he’s lost all hope—that is, until he hears about a legendary abandoned house in a secluded area called Five Mile Creek, buried deep within the forests of Northern Michigan. The house is known by the locals to be haunted. Curious and fearless, JB rallies an unpredictable group of misfits to make a journey to the house one cold February night—even though he knows he’s on the brink of making the same life-altering mistake again. However, what the amateur ghost hunters encounter is far from anything they could have imagined, and all of them are there for reasons of their own, and with a lot at stake. For JB, solving this mystery means facing the decisions that continue to haunt his soul.

Containing echoes of classic ‘80s films such as Stand by Me and The Breakfast Club, The Ghost of Five Mile Creek is, at its heart, an unflinching and authentic take on growing up. While wrestling with the always brewing inner storm of adolescence, the characters—all on the edge of adulthood, with childhood’s idealism slipping from their respective grasps—crave greater answers about the mysteries of life and death, and about who they are as they form their own identities and images. At the heart of this funny, insightful, and profound book are several core questions: Should we allow our pasts to haunt us? Can the harsh reality of death bring any clarity on how we wish to live our lives? And lastly, are all mistakes truly “mistakes,” or do they hold something deeper than shame?

Payne Schanski is an American author who has worked as an educator, coach, and mentor for middle school and high school students over the past decade. Working closely with these students has meant revisiting the fears, insecurities, and mistakes that make adolescence the turbulent learning experience that it is. These observations, as well as the author’s own experiences growing up in Northern Michigan—a quiet, wooded region shrouded with mystery and local lore—inspired him to write The Ghost of Five Mile Creek, his first

After eight years living in Boston, Schanski recently moved back to Northern Michigan with Cathy AuGuste Schanski, his wife, first reader, collaborator, and unending source of inspiration. After thousands of hours of free time on the East Coast devoted to writing about Michigan, in Payne’s words, “it was just a matter of time.”

The Ghost of Five Mile Creek is the middle book of a three part series, along with the soon-to-be-released Blue Houses on the Peninsula and Redemption Summer. Together, the books follow JB’s road towards identity formation and maturity, a path with as many sharp twists as the famous Tunnel of Trees.

The author hopes that young adults everywhere—but especially those he had the joy of working with at Tenacity and the Curley K-8 school in Boston—will connect with, benefit from, and enjoy reading these books.