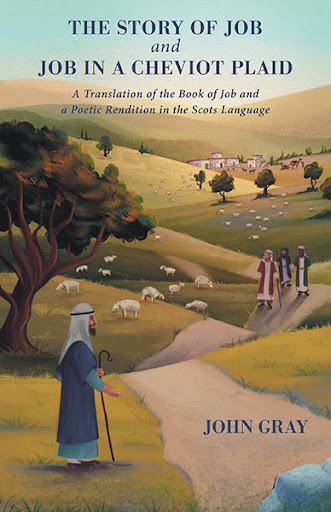 The book is in two parts. The first part, the Story of Job, is a translation and arrangement of the Book of Job extracted from the academic commentary on the Book previously published by Professor Gray. The second part, Job in a Cheviot Plaid, is a poem by him in the Scots language that paraphrases the story of Job in a Scottish setting. The two parts were arranged for publication together in this book by Professor Gray's son, Ian Gray.

The story of Job is an ancient narrative poem from the Old Testament that deals with questions such as human suffering, faith and the sovereignty of God.

Job is a prosperous God-fearing man whose faith is tested through various sufferings. He questions why he is being made to suffer. His three friends (“comforters”) try in vain to provide an answer to the question. In the end, Job appeals directly to God, who provides the answer, which Job humbly accepts and is restored to his former prosperity.

John Gray was Professor of Hebrew and Semitic Languages at Aberdeen University in Scotland from 1962 to 1980. He published books on Middle Eastern archaeology and culture, as well as commentaries on several Books of the Bible. At his death in 2000, he left a manuscript of a commentary on the Book of Job which was published posthumously in 2010. He also left a manuscript of his poem, Job in a Cheviot Plaid.