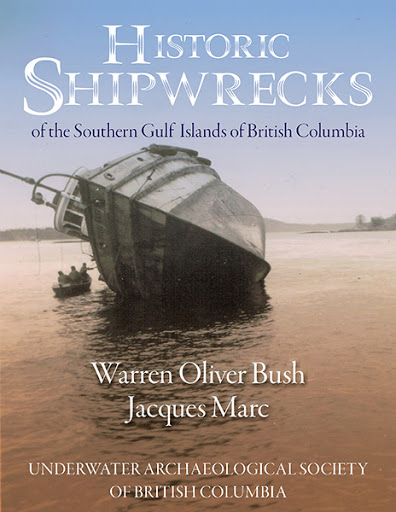 British Columbia’s rugged Southern Gulf Islands enticed many pioneers, explorers, colonists, miners, and adventurers in the mid 19th century. Fog, wind, strong currents and the lack of aids to navigation made navigating these striking and treacherous islands a hazardous business. Many vessels and seafarers did not survive their intended voyages, and their forgotten remains now litter the sea floor, visited only by intrepid divers searching for clues to the past. As one reads this book, stories will unfold which remind us that not so long ago, travelling by ship along the British Columbia coast would have challenged even the most seasoned mariner, and that danger lurked below the water’s surface. Historic Shipwrecks of the Southern Gulf Islands of British Columbia is a compilation of 14 stories about Shipwrecks throughout those islands. This book not only follows the history of each vessel and their loss, but also describes for the lay person what divers will see when they dive on the sites today. This book is a must have for those with an interest in British Columbia’s maritime history. It is one of a series of shipwreck publications produced by the Underwater Archaeological Society of British Columbia to make the province’s submerged cultural history accessible to everyone.

Jacques Marc lives in Victoria, BC, and is a writer, diver, explorer, photographer and avocational underwater archaeologist. His passion is researching, diving and surveying cold water shipwrecks. He has explored 120 wrecks and initiated archaeological surveys on 37 sites. Some more memorable projects he has enjoyed were; diving with Parks Canada in Haida Gwaii, diving on the Great Republic in the Columbia River, surveying the Baymaud in Cambridge Bay, remotely exploring SS Coast Trader and participating in some Sea Hunter episodes with James Delgado. Jacques has held multiple positions with the Underwater Archaeological Society of British Columbia including president and is currently the Explorations Director. He is also a fellow with the Royal Canadian Geographic Society. Jacques has written 5 UASBC regional shipwreck booklets and co-authored 2 more. His work has also appeared in the Alaska Journal of Anthropology and periodicals such as Diver Magazine.

Warren Oliver Bush is a British Columbia based historian and bon vivant. He holds a BA from Trent University and Boston University via Woods Hole, Massachusetts, and an MA in Maritime History from Memorial University of Newfoundland. He is one of the founding members of the Shipwreck Preservation Society of Newfoundland and Labrador, and is the recipient of numerous academic research awards for maritime topics. Warren has a strong interest in the Canada's maritime heritage, is the author of several published articles on Canadian maritime history, and is a dedicated researcher of history's loose ends.