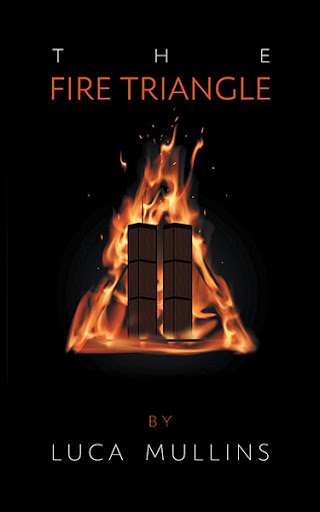 The Fire Triangle
by Luca Mullins

Happiness, saved from the brink of catastrophe, grows from fragility into strength in The Fire Triangle.

This love story emerges from the rubble and twisted steel of the 1 World Trade Center on September 11th, 2001. The hoped-for possibility of a fun first date doesn’t unfold as envisioned—instead, it becomes a feat of survival and the first test of a new couple’s commitment. After a daring and determined rescue from the 101st floor of the tallest building in the world, two optimistic young people—both just beginning their careers in New York City—try to find a new path that might carry them forward together.

Can this couple leave the trauma of the past behind so that they can pursue the cherished dreams they both share?

Luca Mullins is an emerging writer who, at only twelve years old, has been developing his writing talent since the age of six. His keen ability to observe people, places, and relationships is mature and confident.

The Fire Triangle was inspired by a trip to New York City, where he visited the National September 11 Memorial & Museum. His knowledge of the city’s geography demonstrates careful research and reconstructed details. He is proof that travel elevates the spirit and stimulates an adventurous mind. Luca has also traveled to Australia, UK, Italy, France, Germany, the US, and Mexico.