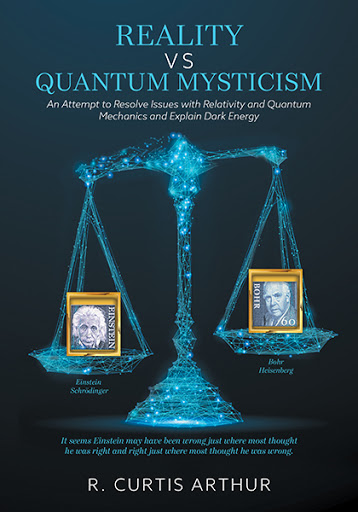 Reality vs Quantum Mysticism
An Attempt to Resolve Issues with Relativity and Quantum Mechanics and Explain Dark Energy
by R. Curtis Arthur

Science has made tremendous advances in overcoming superstition and replacing “revealed truth” with proven factual truth. Quantum mechanics and the Theories of Relativity have contributed immensely to these advances. But, in spite of this, certain absurdities, referred to as the “quantum enigma”, have emerged from the standard interpretation of quantum mechanics. This has been recognized by some physicists, but the absurdities have been largely ignored by most to the detriment of our understanding of the creation, evolution and nature of the universe.

Albert Einstein himself felt quantum mechanics was incomplete and spent the last 3 or 4 decades of his life fighting the proponents of the absurdities. It has been claimed that Einstein lost this battle, but the author disagrees and provides proof of the opposite. Einstein may have made slight mistakes in developing his Theories of Relativity, however, that may have unintentionally contributed to the absurdities and the author’s work supports the statement that "Einstein may have been wrong just where most thought he was right and right just where most thought he was wrong."

The author provides a new analysis of space and time and corrections to aspects of quantum mechanics and the Theories of Relativity that may eliminate the absurdities. This could provide a new understanding of the birth, evolution and nature of the universe and possible explanations for dark energy and dark matter. This is presented in a manner that can be understood and appreciated by all curious folks, not just physicists, and will help them understand their universe and the amazing things physicists have accomplished.

The author has training in science and engineering, an honors degree in physics, a PhD in Neuropharmacology and Postdoctoral work in Neurophysiology. He spent decades as a scientist and executive developing drugs and medical devices to treat brain disease. He was Founder, CEO and Chairman of several biotechnology start-ups. He is author of over 100 scientific articles and book chapters and editor of several scientific book series. He has retained his interest in physics throughout his career and was disturbed by the quantum absurdities presented in many books for the lay public He decided to do something about this and this is his first book, attempting to address this problem, written for the general public as well as for scientists.

He has four successful adult children and he is very proud of them all. He presently lives in Nanaimo, BC with his wife and pet beagle.