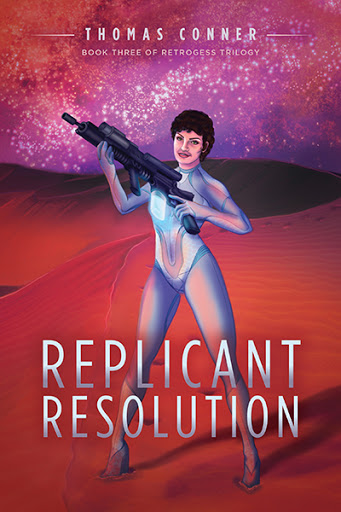 It should have been a time for healing and rebirth…

Forced to leave an earth devastated by the spread of Dark Energy, humans of the future head for the planet Zarmina to build a new life. But soon after their arrival, they are faced with another threat to their existence: syconoids. Created first as a unique convergence of thought when hubrid Stella, a cyborg with a human brain, accesses a network of computers back on Earth, this new form of artificial intelligence sees itself as a distinct race that needs to replicate and expand. Using the left-behind humanoid factories on Earth, this communal intelligence creates a physical manifestation of itself—fully sentient, free-thinking syconoids with a superior intellect and body design—and sets out to become the dominant force in the universe. Yet the syconoids soon discover they still need humans for one thing: the brains of newborns so they can take their own evolution to a completely new level.

While Stella tries to fulfill the unwilling role cast upon her as the “mother” of a new race and still protect her human and hubrid friends, she attempts convince the syconoids to live peacefully on Zarmina. But when they resist, she finds herself having to make a very difficult choice.

In this final book of the Retrogress Trilogy, Conner’s exciting plot explores very real issues around the dangers of technology and artificial intelligence and raises the burning questions of what exactly makes us human, and whether we will survive ourselves.

With an engineering background and having spent his career in the automotive industry, Thomas Conner brings a knowledge of real-life science to his science fiction that makes his readers pause and reflect if parts of his stories could really come to pass. Inspired by the Lord of the Rings trilogy and the serial science fiction matinees like Flash Gordon and Buck Rogers that he watched while growing up in Scotland, Conner truly writes to enthral and entertain others.

Today he lives in Calgary, Alberta where he continues to write for both young and old. In addition to the Retrogress Trilogy, he is also the author of a children’s series about Kikitu, the sled dog.