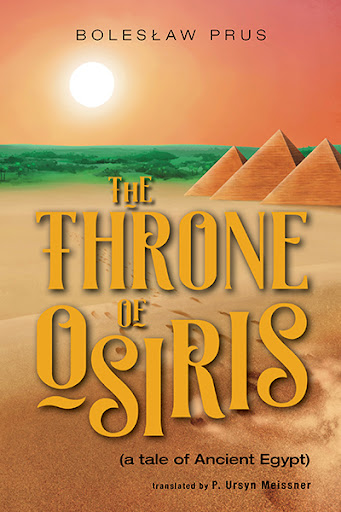 Egypt 1100 BCE - Old age and disease have weakened Pharaoh’s already tenuous grip on power, allowing for Egypt’s archpriests to take partial control of the government. But their heavy-handed policies have plunged the kingdom into financial straits and the debasement of human rights. Seeking to avert a crisis, 22-year-old Crown Prince Ramses issues directives to ease the peoples’ suffering and at the same time to gain funds for what promises to be his own financially strapped reign. However, the entrenched High Council of Archpriests thwarts his efforts. Conflict ensues. The archpriests have but a few allies, the wealth of the temples, and an unusually smart organizing ability. The rest of the nation – the army, police, most government officials and even many of the younger priests - all side with the young ruler. Uneven as the odds are the outcome is far from certain, and the consequent power struggle threatens the kingdom with the collapse of the social order.

The Throne of Osiris is a saga of intrigue and subterfuge—an epic account of crisis in government and the struggle for dominance. This classic tale offers a rich depiction of life in ancient Egypt, the structure of its society, its religious beliefs and traditions. With its numerous parallels to today’s world, it is a study in the raw mechanisms of power and explores the attempts of the young to govern and to right society’s wrongs.

Written in the late 1800s about a world three thousand years ago, replete with parallels to the world of today, the tale outlives time, reminding us that the present is not free of the past, and that vestiges of ancient cultures live on. —Klara Bninska Arnaud

In Bolesław Prus’s exciting historical novel The Throne of Osiris, a pharaoh establishes himself as a ruler in ancient Egypt. [The story] follows the rise and fall of Ramses XIII.

Ramses is a headstrong prince who struggles against cultural and religious obstacles while making his way to power in the eleventh century BCE. His consort, Sara, is a Hebrew, and their relationship is complicated by historical antagonism between their people.

Ramses is locked in a struggle for dominance with the priest Herihor, who imposes limitations on his efforts to rule with rationality and to better the lives of his subjects.

The book’s descriptions of land, clothing, rituals, and the economics of ancient Egypt are rich and detailed. Despite the seriousness of its themes and the density of its historical context, the book is light enough on its feet to enjoy throughout.

This new translation of a historical novel focuses on an Egyptian prince in the 11th century B.C.E. This work, translated by Meissner, maintains both the tone and pace of an age-old epic. The story makes for an insightful, sometimes unexpected look at a past world. It also sheds light on the time in which it was written. The original book by Prus was published in Polish in the 1800s. Readers are left with what amounts to a unique look at two bygone eras. ...

“A vision of mankind as rich as Shakespeare’s, ranging from the sublime to the commonplace” - Christopher Kasparek

- a study of the fates of nations - Wikipedia

"​After his audience with the vice-regent, the Assyrian envoy Sargon dallied in Pi-Bast, awaiting the arrival of Pharaoh’s letters from the capital city of Memphis. At the same time, wild rumors spawned by the Phoenicians began to circulate among Egypt’s military and noblemen—that the archpriests had freed Assyria from having to pay the tribute owed, that they had come to an understanding with Egypt’s mortal enemy, that Pharaoh on learning of these concessions had fallen gravely ill and that Crown Prince Ramses too was shaken by it, but that both royals, unsure whom the army and nobility sided with, felt compelled to defer to the will of the archpriests.

'Can the dynasty really doubt our loyalty?' members of the privileged class whispered among themselves indignantly. 'Have the priests determined to dishonor and destroy Egypt? With their war to the north now is the time to strike Assyria and replenish Pharaoh’s impoverished coffers, as well as our own!'

Ramses said nothing and none could divine just how much he knew. But the steely glint in his eyes at the very mention of the Assyrians betrayed his feelings.

And more whisperings: 'The temples have ensnared the dynasty! Egypt’s safety is in peril!' Silent anger turned to covert conspiratorial meetings. And still the overconfident priests remained ignorant of it all. Only Sargon felt the hatred. But having learned of the dislike Prince Ramses bore for him he attributed it to the incident at the circus and jealousy for the girl. As an emissary he was untouchable, so he drank and indulged and slipped out almost nightly to the priestess who seemed to receive his courting and gifts with increasing favor.

This then was the secretive mood in the highest spheres of Pharaoh’s government at the time."

Bolesław Prus (1847-1912) was the Polish novelist who penned the original work under the title, The Pharaoh. It is an allegory of a reality that Prus was not free to write about due to censorship at the time. In the story, he managed to couch the plight of his native Poland in the 1800s.

Peter Meissner, the translator of The Throne of Osiris, lives in Ontario, Canada.