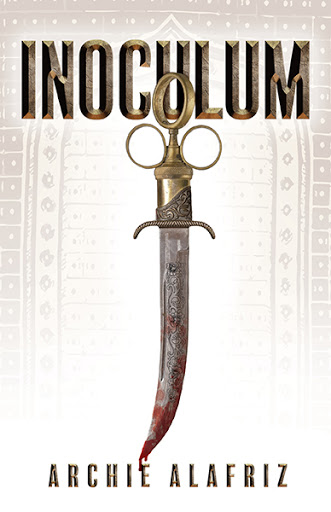 Alec Alton is a member of an elite RCMP National Security team investigating a Pakistani drug trafficking organization. But when his suspects turn up dead, Alec joins up with a colleague, a highly specialized and skilled agent. Together, they trace the drug trafficking to a terrorist financing network. As they follow the evidence and travel through Central Asia, they begin to suspect that a corrupt CIA agent had a hand in one of the worst atrocities in history. Their investigation finds them rogue agents, travelling undercover through the Middle East. One by one, they meet key informants, former members of the mujaheddin, who each hold a piece of buried history. But they fear the CIA operative behind the rise of al-Qaida are after them. Running out of time, they must debrief a list of informants before the CIA operative gets to them. Together they hunt for the elusive Purple Book, thought long destroyed during the raid on Osama bin Laden’s compound in Abbottabad.

Inoculum explores themes of terrorism, national security, espionage, geo-politics and corruption. It lightly walks the reader through the history of middle eastern conflicts, ultimately connecting the exploitation of Muslim republics in the ’70s to the tragic events of 9/11.

A thrilling and moving portrayal of how the western world has helped create the myth and spread of Islamic radicalization, this book is for everyone and anyone who craves answers to the some of the biggest questions in our recent history.

Archie Alafriz retired a 27-year veteran of the RCMP. He served more than half of his career as a threat finance specialist in the National Security Program. There, he enjoyed many successes in the anti-terrorism front. His first novel is a fiction based on the best plausible game theory analysis of the events that led to 9-11. He explains how “false” realities and storylines are created as a matter of tradecraft; oftentimes for political purposes. To label someone a terrorist dehumanizes them, he says. The label places limits to our perception and prevents us from seeing the marginalized, the disenfranchised and mentally compromised. Archie wrote this story in hopes of diminishing our fears and opening our hearts to compassion. It’s hard to believe, he says, that halfway around the world a child lays awake at night, in fear that we may come for him or his parents. Today, Archie is a consultant for anti-money laundering and terrorist financing based in Vancouver, Canada.