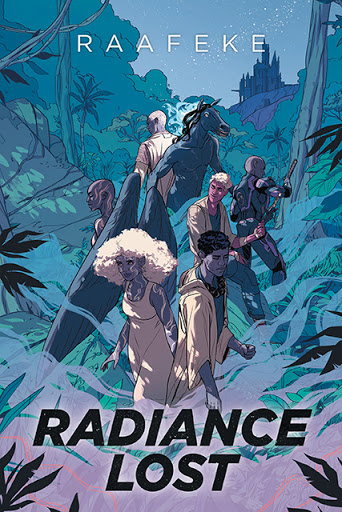 Inspired by Caribbean and African culture and mythology, Radiance Lost is a story of adventure, self-discovery, family, and friendship. When Zara is abducted by mysterious shadow spirits from her home in the jungle, her older brother, Nwanne, is forced to leave the only home he’s known to save her. With the guidance of an akụkọ named Chwal, the companionship of a creature named Bakari, the knowledge of a seer named Tai, and the help from other friends and acquaintances he meets along the way, Nwanne journeys through Juuga and discovers a magical ability within himself that he must master as he prepares for the inevitable dangers that lie ahead.

Throughout his quest to find his sister, Nwanne also discovers the true meaning of deceit and trust, the value and negotiations of life itself, and the heaviness of bonds with family and loved ones. Radiance Lost is a fascinating adventure that will both captivate and resonate with modern fantasy fans.

Raafeke (Richard Anthony Perry Jr.) is pursuing a Bachelor’s degree in English with a specialization in creative writing, as well as a minor in Theatre at Georgia State University. He has written many short stories and uses his creativity to bring worlds to life—worlds that reflect his Caribbean (Guyanese and Grenadian) heritage and provide a space for Black children to feel seen.

He has won several writing awards from both Mercer University and Georgia State University. Born in Brooklyn, New York, Raafeke now lives in Dacula, Georgia, with his family and three dogs. Radiance Lost is his first book and the first book in an upcoming series.