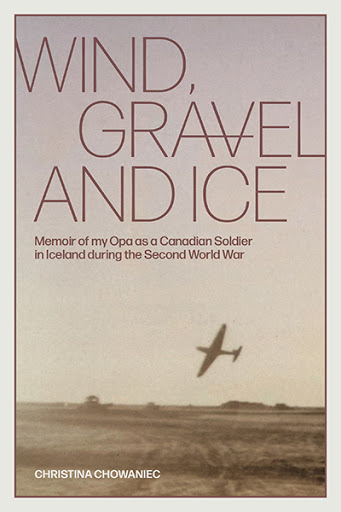 Wind, Gravel and Ice
Memoir of my Opa as a Canadian Soldier in Iceland during the Second World War
by Christina Chowaniec

When Christina discovers her Grandfather’s diary years after his death, she is surprised to learn he had been stationed in Iceland as a young Canadian soldier in the early days of the Second World War. Intrigued, she sets out on a decade long journey to unravel his story and fill in a little known piece of the Canadian war story.

From the official records in the National Archives in Ottawa to the windswept plains of Iceland, Christina follows the trail and crafts her Opa’s story in his voice. This is the story of the ten months, from July 1940 to April 1941, that her Opa spent in Iceland with the Cameron Highlanders of Ottawa building an airfield and installing machine guns to protect the island from German invasion. She vividly recreates the daily rigours of camp life experienced by her Opa, his childhood best friend and their platoon as they struggle to carry out orders as new soldiers in a strange land, and to break down barriers with local Icelanders who resent the Occupation.

Then on February 9, 1941, a lone German Heinkel HE 111 bomber traded its bombs for extra fuel, set a course for the remote and strafed an airfield 1,000 miles from the front lines of the war. This strange act, one plane attacking one obscure outpost, manned by her Opa’s platoon, is a story few will be familiar with, and yet those moments changed the course of the war.

"Christina Chowaniec has brought to life the little known story of Canada's garrison in Iceland during the Second World War. Her thorough research is transformed into an engaging imagined narrative of the service of her Grandfather. The characters, from fellow soldiers and local Icelanders, are finely drawn and act as our guides in the strange and evocative landscape of the island. A much-needed chapter in the story of Canada's wartime generation."

"In the darkest days of the Second World War, Canada was involved in the occupation of a strategic island in the North Atlantic. This book tells the story of that little-known episode as seen through the eyes of one young Canadian soldier, Private Claude Arthur Hill of the Cameron Highlanders of Ottawa. Private Hill’s granddaughter, Christina, has crafted that rare and valuable treat; a work that skillfully mixes military history with social history. "

Christina undertook the writing of this book after discovering her grandfather’s journal and learning that Canadian soldiers were stationed in Iceland. She played with toy soldiers as a kid and has always been interested in military history. She came to realize that this was an untold piece of the Canadian war story that needed to be researched and written. She lives in Vancouver.