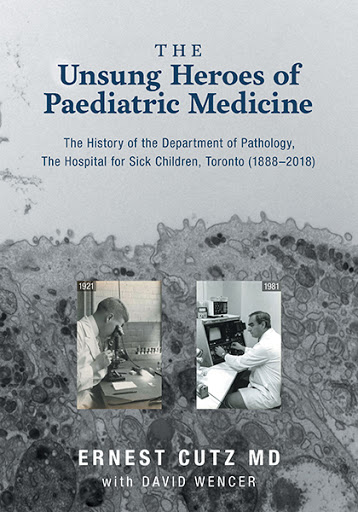 The Unsung Heroes of Paediatric Medicine
The History of the Department of Pathology, The Hospital for Sick Children, Toronto (1888-2018)
by Ernest Cutz and David Wencer

Within the world of medicine, the work the pathologist does is integral to positive patient outcomes, but it is rare for the pathologist to actually have any interaction with their patients. Thus, their work can often go unrecognized and uncelebrated. The Unsung Heroes of Paediatric Medicine paints a broad portrait of the myriad facets that go into the making of a superb department of paediatric pathology. Not only is it the science, but it is also the people that helped to make a department such as this grow and flourish, becoming one of the best, if not the best, in North America.

Within these pages, Dr. Cutz walks the reader through a century of pediatric pathology at Sick Kids Hospital in Toronto, Ontario. Building on both personal experience and archival material, Dr. Cutz’s memoir touches on the history of pathology and the evolution of pediatric pathology, then moves into a detailed overview of both the leadership and staff of the Department of Pathology at Sick Kids Hospital.

In addition, readers can follow Dr. Cutz’s personal journey from his research fellowship to his beginnings as a staff pathologist, ending with his research advances and breakthroughs all made whilst a pathologist at Sick kids. Unsung Heroes also touches on controversies, tragedies, and challenging events from the hospital's history, including digoxin, the Olivieri affair, the rise and fall of Charles Smith, and the Mother Risk controversy, among others.

"This memoir explores important themes and individuals who could not be included in the general history of the hospital, notably the famous digoxin episode and the rise (and fall) of Charles Smith. The book will no doubt provide an excellent resource for those interested in the history of the Department of Pathology and the hospital more generally."

"In this book, Dr. Cutz, reviews over a century of history of one of the most distinguished Departments of Pediatric Pathology in the world. With its engaging style and excellent documentation, the book is of special interest for physicians, medical historians and scientists. I highly recommend this notable work. "

"Dr. Ernest Cutz, chronicles the story of the Department of Pathology at the world famous Hospital for Sick Children. He tells us how his own role as a pathologist placed him amid commotions that went beyond the confines of the hospital lab. The result is a text that does not read like a dry chronicle, but like a picture of a Pathology Department throbbing with life."

Dr. Ernest Cutz is a well-known academic physician who specializes in paediatric pathology. He is a graduate of Charles University Medical school in Prague, with residency and research training at University of Toronto. He was a senior staff pathologist in the Department of Pathology, senior research associate in the Research Institute, The Hospital for Sick Children, and Professor of Pathology at the University of Toronto.

In addition to being a pathologist, Dr. Cutz also carried out original research in cell biology and pathology, and is the discoverer of several paediatric diseases: including congenital enteropathies (mirovillous inclusion disease and tufting enteropathy) and a neonatal lung disease (pulmonary interstitial glycogenosis). Dr. Cutz spent his entire career of 50 years as an academic pathologist at the Hospital for Sick Children, which gives him a unique personal and historical perspective on the place and practice of paediatric pathology within a children's hospital.

Dr. Cutz lives in Oakville, Ontario, with his wife. He has previously authored Cellular and Molecular Biology of Airway Chemo-Receptors (1997) and was a contributing editor for Airway Chemoreceptors in the Vertebrates: Structure, Evolution and Function (2009).