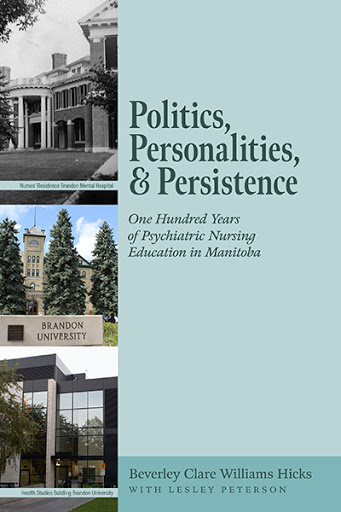 Politics, Personalities, and Persistence tells the story of the evolution of registered psychiatric nursing in the province of Manitoba. This comprehensive account traces the distinct profession’s transition from the asylums of Manitoba, where for seventy years psychiatric nurses had cared for the mentally ill when few others were interested in them, to the halls of academia in Brandon University in 1986, the first university in Canada to grant a baccalaureate degree to psychiatric nurses.

This specialty began in the asylums and took further shape in this small prairie university on the banks of the Assiniboine River courtesy of the energy and vision of many dedicated individuals who believed in the legitimate place of psychiatric nursing in the health-care field and pushed hard for its recognition. What makes this story unique is that the emergence of psychiatric nursing in Manitoba—and indeed in Western Canada—countered the established practice of the general nursing regulatory bodies, who viewed psychiatric nursing as a specialty to be pursued at the graduate level. At times this created tension between the two groups.

Politics, Personalities, and Persistence draws on documentary records from Manitoba archives, as well as the personal recollections and colourful reminiscences of key players. It explores the legal recognition of psychiatric nursing, challenges to its place in the nursing community, and the role of government policies in the development of the profession.

Beverley Hicks' masterful tale of psychiatric nursing in Manitoba is a detailed, rich description of the birth of one program over the course of 100 years. The creation of a profession from a practice is instructive to anyone associated with post-secondary education. Hicks' story should be read with interest by anyone in post secondary fields, professionals, and government officials. What makes the story more compelling is the long and twisted tale of how Brandon University became the first university in the country to offer a Bachelor's degree in psychiatric nursing. It then became the first in Canada to offer a Master's degree in the same field. Dr. David Docherty, President and Vice-Chancellor, Brandon University

Hicks wrote a dissertation on the evolution of psychiatric nursing education and, in retirement, found herself compelled to write the history, in which she had played a part. She lives happily alone in Brandon, Manitoba, with her books and music.