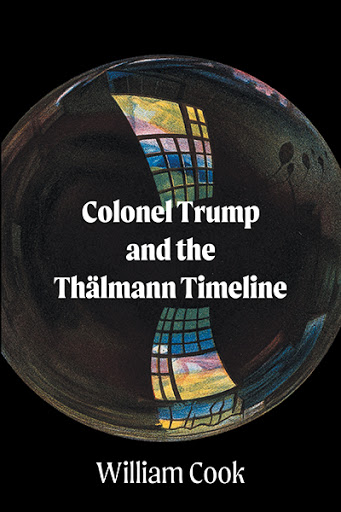 Colonel Trump and the Thälmann Timeline
by William Cook

Every person matters in the grand scheme of things. Every action has a reaction.

When a group of Distant Origin theorists recreate the fabled Nazi time machine Die Glocke (the “Bell”) to prove their theory of mankind’s alien origins, they kick off a series of events that changes the course of history. When their maiden voyage is sabotaged, the crew find themselves stranded in New York State 1983, but it’s a very different time and place from their recorded history. Can Jake, the Professor, and their crew find a way to mend time and get back home or will they be stranded forever in the Thalmann timeline?

Colonel Trump and the Thalmann Timeline is brimming with action and romance, a Communist invasion, American soldiers, scientific theory, alternate history, and, of course, Colonel Trump.

William Cook is a full-time farmer in Bruce County, Ontario.