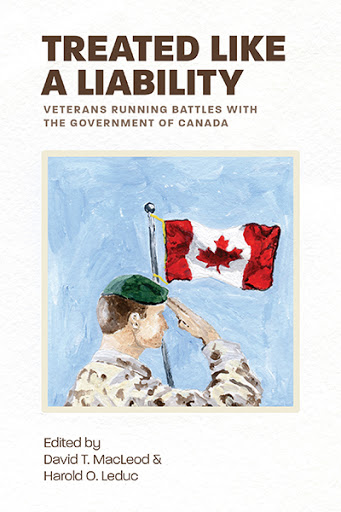 Treated Like a Liability
Veterans Running Battles with the Government of Canada
by David T. MacLeod and Harold O. Leduc

War has evolved, and so have Canada’s security needs. A key asset in any military is high-quality personnel. However, the Canadian Armed Forces ability to attract quality personnel hinges on the success of Veteran Affairs Canada’s ability to care for service men and women, and their families.

The essays in this book identify failures within the Government of Canada and Veterans Affairs Canada to address the needs of veterans, especially the wounded and their families. The Government of Canada advertises benefits and services that veterans are supposed to receive, but institutional bias and indifference prevent them from accessing these much-needed resources.

In addition to outlining various problems within the current system, this book offers numerous solutions to help policymakers, veterans, and others work together to rectify this situation, enabling Canada to continue to meet its military needs and obligations both at home and abroad.

David MacLeod, CD MA, is a husband, father, veteran, and small-business owner. He served in the Canadian Armed Forces from 1982 to 2010 and was deployed to Cyprus, Bosnia, Kosovo, South West Asia, and Afghanistan. David has participated in numerous veteran advocacy efforts at the national and local level.

Harold Leduc, MMM CD MA, has written numerous technical documents on veterans’ benefits and legislation for the Government of Canada. Significantly, he co-authored “Honouring Canada’s Commitment: Opportunity with Security,” a document that led to the modernizations of benefits for Canadian Forces veterans. Harold served with distinction in the Canadian Army and was invested as a member of the Order of Military Merit.

MacLeod and Leduc have previously written a book on challenges veterans and their families face with the Veteran Affairs application process and the Veterans Review and Appeal Board entitled: A Dirty Little Skirmish.