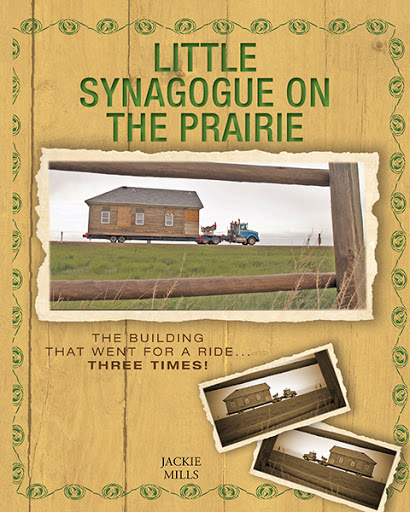 Little Synagogue on the Prairie
The Building that Went for a Ride... Three Times!
by Jackie Mills

You may never have heard of a building being lifted off its foundations and moved, not once, but three times! This is the story of the Little Synagogue, the Montefiori Institute, which was originally built in 1916. It became a gathering place for Jewish pioneering ranchers and their neighbours who helped to open up Canada’s West early in the twentieth century. When the dust bowl of the Great Depression dried up the land, most of the farmers left the area, and the Little Synagogue was abandoned. It was eventually moved and turned into a small house in Hanna, Alberta. Years later, a group of Jewish Calgarians heard that the Little Synagogue still existed and decided to track it down, restore it, and donate it to Calgary’s Heritage Park. In June 2009, the fully restored Little Synagogue was opened and now attracts visitors from all over the world. This charming Canadian history story for early and middle readers is filled with archival and interpretive photographs. It’s a special part of the great Canadian historical mosaic that will engage readers of all ages.

An elementary and secondary school teacher by training, Jackie Mills was an interpreter in the Montefiore Synagogue for five years and told this story orally many, many times.