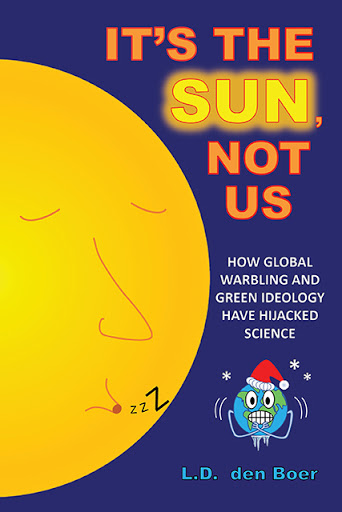 It's The Sun, Not Us
How Global Warbling and Green Ideology have Hijacked Science
by L.D. den Boer

Earth’s climate is changing—it always has and always will. The cause may be debated, but “man-made global warming” has become the accepted narrative and “Big Oil” the popular villain. Anyone daring to challenge this “consensus” is attacked: smeared, demonized as a “denier,” even threatened. Researchers who refuse to toe the line are discredited, dismissed as incompetent, and blacklisted, regardless of their expertise, experience, or credentials. This is not how science is conducted.

But not everyone can be silenced. The author of this book is not incompetent. Nor was he paid to write it. He’s just someone who cares about the truth: a scientist, with a broad understanding of how Earth’s climate works and how it has changed over time.

His book is divided into two parts: science and ideology. The first part explains (in language laypersons can understand) how the Sun, cosmic rays, and other natural factors control Earth’s climate, and why carbon dioxide is virtually irrelevant. The second part exposes and refutes the green ideology of “man-made global warming,” revealing the economic damage it causes. It may be short, but it’s well researched, packed with information, and an enjoyable, rewarding read.

As a geoscientist and professional geophysicist, Mr. den Boer is deeply concerned by the propaganda of green ideology: by how it has corrupted science, by how many people it has deceived, by the political agenda of the unelected body driving it, and how this agenda threatens the global economy, even democracy itself. These concerns led him to write this book, to warn people how and why they are being manipulated.

Mr. den Boer lives in Calgary, Alberta, with his family. His cat loves the Sun.