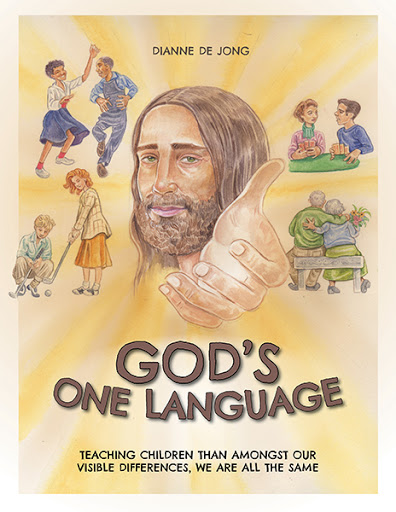 God's One Language
Teaching Children Than Amongst Our Visible Differences, We Are All The Same
by Dianne De Jong

Dianne De Jong strives to teach children that amongst our visible differences, we are all the same. While on a mission trip in Haiti, Dianne was speaking with a sweet, faith-filled, elderly Haitian man. Although this man did not speak a word of English, the translator was able to communicate to her what this gentleman was saying. He smiled and pointed up to the sky saying, "Thank you for your kindness. We will talk again because we will all speak the same one language in heaven some day." This union of being as one and speaking one language that everyone comprehends sets the premise for the book, God's One Language. Children can listen to the moral of the story that it does not matter where in the world you go, all humans smile, laugh, cry, sleep and dream in the same language. Dianne believes love is universal and that all children will benefit from hearing this story which embraces having empathy for all we meet because we are all the same and recognizing we are all brothers and sisters as children of God. Dianne's other three children's stories include My Collection, God's Brilliant Shining Star and Where In The World?

"The text encourages readers to find activities that everyone has in common, such as smiling, hugging and kissing, playing games, holding hands, participating in music and dance, grieving, celebrating a baby’s arrival, and falling asleep. These similarities are referred to as a 'language' that’s the same for all of humanity ... There’s also a Bible quote, a prayer for respecting differences, and list of discussion questions, which make this book most suitable for use at home or in a religious-school setting. The core theme of this inspirational book is that all humanity has important core traits in common; however, it also effectively acknowledges that one should take joy in traits that differ. This straightforward message is a universal one."

Dianne De Jong is a principal in Southwestern, Ontario, Canada. She currently lives in St. Marys. Her first year of teaching brought her to teach 28 five year old's in New Zealand. Dianne loves to travel and hopes to see the world by spreading the loving message to children and parents of believing in yourself, serving those around you and being love to others. Dianne's greatest joy is being a mom to her two children- Spencer and Ashlyn. Dianne's most impactful moments in life are during her yearly mission trips to Haiti, Dominican Republic, Guatemala, or wherever she feels called to serve. She believes in giving back for all her blessings in life. She is passionate about education, teaching children to imagine themselves in another's shoes and experiences. Her business is called Education Through Empathy. She loves to spend time on the water SUP or boating, snorkelling or jet-sking, writing, photography, campfires and going to sporting events and concerts. Dianne loves to read with children and to teach them to be compassionate toward all the people we are blessed to meet in a day. Dianne's other children's stories include My Collection: How Children Can Develop Daily Prayers of Thanks, God's Brilliant Shining Star: Learning and Growing in Love, and Where In The Word?: Learning To Make A Difference In The Lives Of Others.