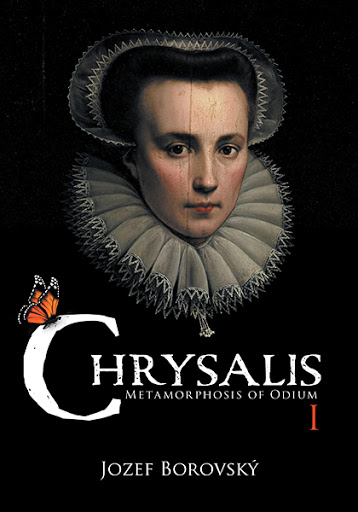 Chrysalis I
Metamorphosis of Odium
by Jozef Borovský

This book does not claim absolute truths, but it speaks for those who can no longer speak for themselves by the histories they witnessed, wrote about, and which defined their ancestors and descendants, including the most powerful woman that ever lived – Countess Elizabeth Bathory. She tried to change the world; she paradoxically succeeded and failed. But what drove her? What did she know, we do not? What is her history? To begin to understand all this, one must travel back in time to when it began, when truth first became obscured, and when European society – Western culture - went horribly wrong. It is why her world was the way it was. Today, historiological “truths” of European Medieval Dark Ages, at best, exist as dim flashes of information in ancient manuscripts. A very interconnected European medieval history has much more, but inconvenient historiological information to informs us of events, names, places, and dates, but like a giant, complicated jigsaw puzzle. Unfortunately, many pieces are still missing, none more so than that of Carpathia. Consequently, an incomplete, theoretical picture of historical reality remains. There’s a reason for it. Throughout history, Europeans struggled for Humility, Humanity and Liberty, but only Carpathian Ungars maintained and struggled to keep it for more than a millennium – from about 600 to 1711. Their history has gone missing, supplanted by myths. Their greatest leaders are caricatures of Gothic horror literature, and their greatest traitors are their heroes. Their monuments are everywhere. Carpathia’s history does not exist in Western consciousness. What is it about Carpathia we are not supposed to know? Its missing medieval jigsaw puzzle pieces, when liberated from obscure archives, then reassembled, and inserted into the macro context of centuries, however, allows us to understand why. The period covered in this book is roughly seven centuries. It’s a litany of tragic moral failures. It begins with spiritual leaders who consistently failed in their moral duty because they misguidedly assumed a Roman imperial culture from the outset. It ends with the creation of a repressed imperial Ungaria and the supposed “first kings of Hungary.” Events within this book’s pages cover most of the first great pendulum swing of “European Cultural Chrysalis” – it’s Metamorphosis of Odium.” It explores the complexity of why, and how European culture became one of intolerance and hatred which tried to extinct all non-conformists within their divine Medieval European World Order. It explains why it was perfectly ethical and moral, and why society believed in the Resurrection of all things good after the final Apocalypse – this order’s primary vision. Resisting all this, of course, were all Carpathian cultures, the last being the Slavic-Turkic Ungars. To the Medieval European World Order, they, like the Caliphates, were the greatest heretics and heathens of the Dark Ages. These civilisations were the last refuge of Life, Liberty, and the Pursuit of Happiness in a world which had none. It’s a story of us.

My father was an author. He wrote real history - of Elizabeth Bathory - based on his research in the 1950s. It turned out that to the regime, even centuries-old history mattered a great deal. It earned him “political re-education” in a Communist labour camp before I was born. His works, destroyed. I’m an amateur historian beholden to nobody for my work. I’m Canadian, university educated, but born in Czechoslovakia, now Slovakia. I write for myself, but primarily to honour my parent's memory, for my family, friends, and of course, for Elizabeth, for Wisdom’s Triumph! This book has been an intimate journey of discovery for me, as I’m sure it will be for the reader. I think I managed to resurrect something my father wrote all those years ago. I hope you enjoy reading my book as much as I loved writing it.