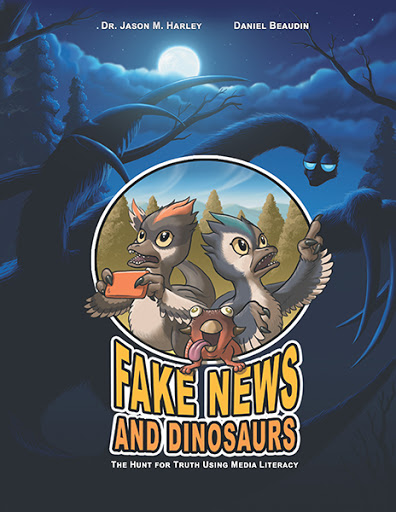 What would dinosaurs do about fake news if they were alive today?

Two young troodons, Soloyo and Tyru, don’t agree about anything except that they need to do something—and fast—about a mysterious creature that was spotted in the farmlands. Livestock are being murdered. Prized show raptors are disappearing. Troodons are buying weapons to kill something no one has gotten a good look at, but everyone is forming strong opinions about.

Is ‘The Forest Monster’ an endangered creature pushed out of its natural habitat, or a murderous beast with an appetite for young dinosaurs? Soloyo and Tyru must question what they thought were obvious truths and become more critical thinkers to solve the mystery. 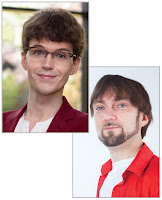 Dr. Jason M. Harley is an educational psychologist and university professor. Their research and teaching on topics such as media literacy and fake news have led to appearances on CBC News, Global News, CTV News, Radio-Canada: Le Téléjournal, and the Edmonton Journal. Dr. Harley was awarded the 2018 Outstanding Early Career Researcher Award sponsored by the TICL Group of the American Educational Research Association. Their most recent work of fiction was published in Tesseracts 21: Nevertheless.

Daniel Beaudin is a professional illustrator and graphic designer whose work includes cover illustrations for science fiction magazines, illustrations for textbooks, and the creation of concept art for video games. Daniel has collaborated with Disney, Berlitz, and Electronic Arts (EA), and managed adaptations of Tetris, Pac-Man and Street Fighter. His newest art exhibit goes on tour as part of the Art Gallery of Alberta’s TREX exhibit 2018/2019.