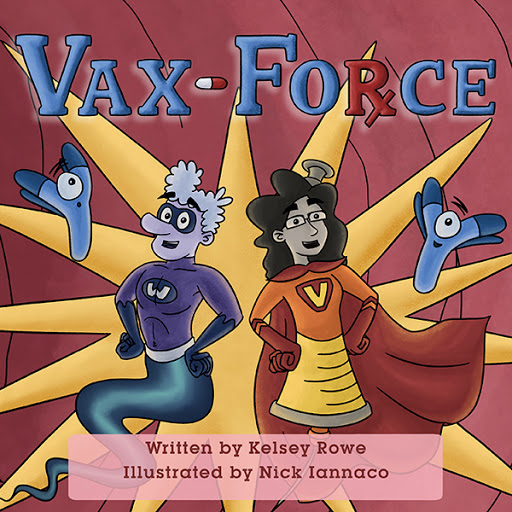 Join Vax-Force as they explore how vaccination works inside your body!

Dr. Vaxson explains how trusted doctors and scientists made Vicky the Vaccine. Her mission is to tell Willy the White Blood Cell and his Antibuddies how to find and fight bad guy germs like Measles, Tetanus, and Polio. So come along on this exciting and educational vaccination adventure with Vax-Force!

"Getting vaccines can be really scary for kids so I am delighted that there is finally a book like Vax-Force to help kids understand how immunizations work and how their own bodies become superheroes using vaccines as tools to fight off harmful infections. Employing simple, direct language and clever, delightful illustrations, Kelsey Rowe and Nick Iannaco’s book makes it clear to kids that getting immunized is a strong and brave and even fun thing to do!"

Kelsey is an MD/MBA student at Saint Louis University School of Medicine and Richard A. Chaifetz School of Business. She will graduate in 2020 and intends to pursue a career in pediatrics. She has also published research related to herpes vaccine development.

While working in pediatrics clinics as a student, Kelsey realized there were limited resources aimed towards helping children understand why they needed shots. She also

grew frustrated with the Anti-Vax movement. She wanted an easier way to help kids and adults understand vaccines, and Vax-Force was born.

Kelsey is originally from Topeka, Kansas. She enjoys running, painting, and far too much coffee.

Nick graduated with a BFA from Rochester Institute of Technology in 2019. There, he studied 2D Animation with a minor in Music & Technology. Nick is mainly interested in concept art, animation, storyboarding, sound design, and foley recording.

Originally, Nick is from Southern New Hampshire. At an early age, he began

drawing and became quickly interested in music as well. Nick has played in bands throughout his education and has composed a score for a fellow student’s film as well.

In addition to drawing and animation, Nick enjoys playing the drums, swimming, reading, and catching up on his favorite television shows.

For more information on Nick and his portfolio, visit http://nickiannaco.weebly.com