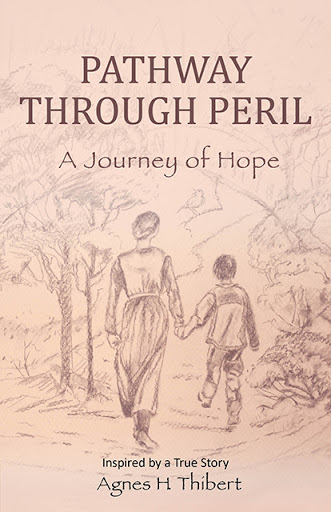 Pathway Through Peril
A Journey of Hope
by Agnes H. Thibert

For the colonies of Mennonites living in the fertile, prosperous part of Russia known as the Ukraine in the early twentieth century, life was idyllic. Paradise, some called it. The moderate climate, lush fields of grain, abundant orchards and steppes of waving grass, afforded them a comfortable, and for some even wealthy life-style. Their belief in non-resistance was never challenged, and no distant sign of turmoil intruded itself into their awareness; the future looked endlessly bright and sunny. It all changed with the beginning of WW1, the Russian Revolution and Civil War.

The fictional Schroeder, Boldt and Lentz families are caught in the middle of warring factions which range back and forth over their peaceful villages, bringing destruction, famine, disease and death to their door. Also caught in the strangling net of revolution is Ivan, a young Russian orphan whose future rests in the hands of someone he has never known.

One question faces them all: should they stay... or venture into an unknown

future in a foreign land?

"This is a sensitive, compelling and interesting work which captures well the spirit and attitudes of Mennonites and other people living in very difficult times. The descriptions of people and places are very well done.”

“Agnes has written a story about love and generosity of spirit that cannot help but inspire readers to seek the best in each other during the most turbulent of times. Through her too-real characters we see a dark world transformed by a willingness to offer strangers a helping hand and, with remarkable bravery, leave the past behind.”

Agnes Thibert was born in Coaldale, Alberta, where her parents lived after immigrating from Ukraine. She spent most of her school years in Coaldale and graduated from the University of Lethbridge with a B.Ed. in 1982. After an extensive teaching career, she retired in 2000 and now lives in the rural Lundbreck area, near Pincher Creek, where she and her husband raised their family.

Mother of three, grandmother of six, great-grandmother of two, Agnes is an avid researcher into the lives of her family members who lived through the tumultuous years of Revolution and Civil War in Russia, before their emigration to Canada

When her brother, Peter Langemann took on the task of translating the dozens of letters received by their parents from the relatives left behind in Ukraine to face the wrath of the Bolshevik government, the door to the past opened. The language barrier was overcome and the signatures on the letters, the names on the back of fragile, discoloured photos turned into real people. They were her aunts, her uncles, her grandparents. Their experiences became part of the lore of Agnes’ childhood. Her parents kept in constant communication with the loved ones until 1934 when the last letter arrived, and all communication ceased.

It is her hope that the lives of the fictional families in the book reflect the faith, courage and sacrifice it took for so many to leave the past behind and face existence in a strange land.