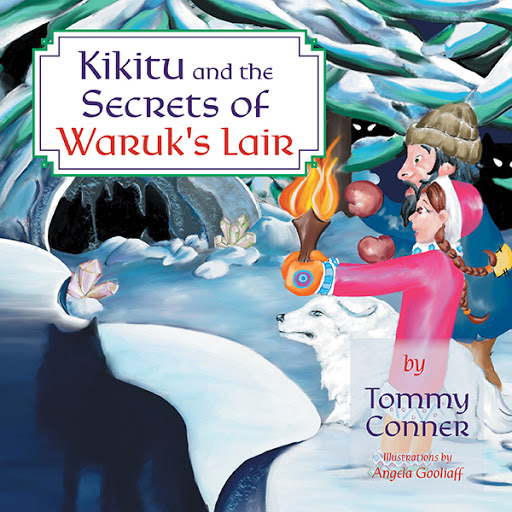 Kikitu and the Secrets of Waruk's Lair
by Tommy Conner

Eleven-year-old Yuka and her loyal lead sled dog Kikitu are always up for a challenge! But challenges don’t seem to stop coming when they set out on a journey to enter one of the biggest sled dog races of the North. Even before they reach the race, they come across an injured prospector who they must transport to a hospital. What they don’t know is that the prospector is returning from having discovered the secret lair of Waruk, the ancient warrior chief of all wolves in the North. There he found a golden talisman that he now wears around his neck, and the wolves want it back!

Part wolf himself, Kikitu wants to do the right thing and return it, but first he and his dog team must help Yuka win the dog sled race. That’s made even more difficult by Bart Blackwood, another competitor who is willing to do anything – even injure other racers – in order to win! It will take all of Kikitu and Yuka’s determination, skill, and strength to survive the race and get back to Waruk’s secret lair to return the talisman. And they must do it before the wolves get tired of waiting for it and decide to attack!

Set in Nunavut, Canada, Kikitu and the Secrets of Waruk’s Lair is the second exciting book in the Yuka and Kikitu series.

Author Thomas Conner created the first Yuka and Kikitu adventure, Kikitu Saves Christmas, to get children interested in reading and teach them about the beauty of the North and its people. This grew into an exciting second book, with a third – Kikitu and the Stolen Children Mystery – to follow shortly.

Thomas was born in Scotland, but moved to Canada to work as an engineer. He is now retired and lives in Calgary, Alberta, where he spends much of his time writing. In addition to his Yuka and Kikitu books, Thomas has also published two science fiction books for adults: Retrogress and Rebirth.

Kikitu and the Secrets of Waruk's Lair will be available in the FriesenPress Bookstore soon.