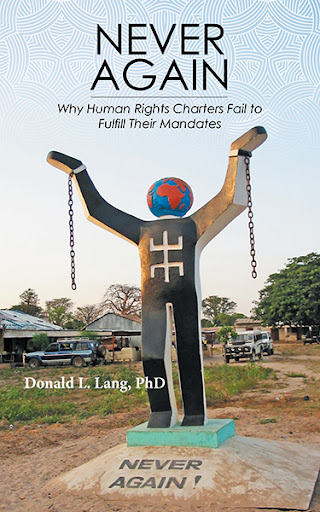 Freedom. The Berber symbol adorns a monument outside the Museum of Slavery in The Gambia. It’s also an emblem of hope, that “never again” will such wrongheaded political mindsets cloud our judgment about “rights” and “freedoms,” now enshrined in human rights charters. Yet those fervent words—never again—as author Donald L. Lang points out, are also the title and rallying cry of a recent book on the aftermath of yet another mass high-school shooting. Where rights and freedoms are concerned, do politics trump all?

Never Again: Why Human Rights Charters Fail to Fulfill Their Mandates explores the ongoing failures in the efficacy of human rights charters in fulfilling their mandates. At the outset, he plunges the reader into a deep well of analysis, starting with the first flaw in these charters: the human mind. At the book’s core is the wisdom and guidance of Roger Bacon, concerning the pursuit of truth. The book grapples with monumental questions such as: What makes a being a human being and not something else?

Harking back to the philosophies of Marcus Aurelius and Immanuel Kant, complemented by modern thinkers such as Yuval Noah Harari and Robert B. Reich, the author teases out the true meaning of the word “good.” Lang questions the authenticity in which political leaders, philosophers, spiritual guides, big thinkers, business leaders, scientists, and the book’s primary audience—educators—meaningfully deal with humanity’s most fundamental issues. He posits the reality that what we, as humans, value lies on a continuum between authentic good and inauthentic good—or evil. Lang’s solution includes proposing rational-based humanism, a new philosophy of education, to rethink materialistic measures of success with the aim of equality of life, for all.