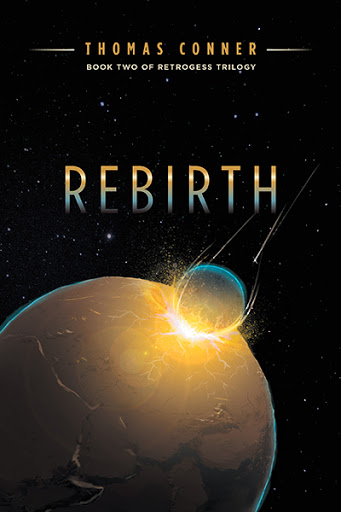 Can rebirth come from intentional destruction? And when is it better to abandon a damaged world – or time – than to try to fix it? These are the questions that need to be answered for the future people of Earth, whose home world has been devastated and left without water by the unseen force of Dark Energy. In an attempt to revive the now evacuated planet and reintroduce water to it, scientists force a collision between earth and Saturn’s icy moon Enceladus. Will the planet be saved or must humanity be forced to seek other alternative habitable planets? From their vantage point above Earth in the last starship, all they can do is wait for the dust to settle.

Meanwhile, Earth in the present is experiencing staggering leaps in technology, as Dr. Stella Cooke, a present-day human who time travelled to the future and was enhanced by their technology (a hubrid), works to prepare humanity for its planet’s impending devastation. Working with present-day investment capitalists, scientists, and even Homeland Security contacts, Stella introduces humanoids – a combination of tissue engineering, robotics, artificial intelligence, and fusion power – to the world as well as the hyperspace ship VARRO that is capable of time travel. As the fates of those in the present and the future become hopelessly intertwined, Stella and her associates from both time periods must decide where and when home is and what being a human truly means.

Rebirth is Thomas Conner’s second novel and book two in the Retrogress Trilogy. Conner’s love for sci-fi reaches back to his childhood love for serial matinees like Flash Gordon and Buck Rogers that he watched while growing up in Scotland. Later, fired by his love of classic sci-fi books, such as the Lord of the Rings, and backed up by a real-life interest in and knowledge of science and engineering, Conner began to write his own stories to entertain others.

Today, Conner lives in Calgary, Alberta, where he still loves reading and writing, as well as music. Watch for Replicant Resolution, the third book in the Retrogress trilogy, as well as a children’s book from Conner coming soon.