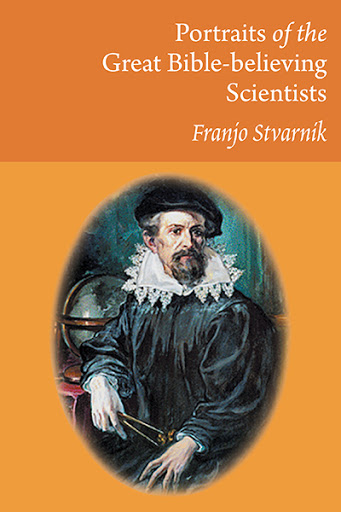 Portraits of the Great Bible-believing Scientists
by Franjo Stvarnik

“More than 60 years ago,” remembered Mr. Stvarnik, “I read the books From Ancient Philosophy to Modern Science of Atoms by prof. dr. Ivan Supek, and the Images from the Lives of Great Scientists by prof. dr. Milutin Milankovic, and for me these are still the most beautiful scientific texts.” From that time, as a much loving hobby, Mr. Stvarnik has studied biographies of great scientists. “I have grown up in an atheistic country,” he once said, “and therefore it was a surprise to find that there were very few atheistic or agnostic scientists; the majority of them were some kind of believers in God. Actually, a good number of the greatest scientific minds were or are Bible-believing Christians.” That realization, along with discoveries of some deliberate distortions of historical facts that made certain Bible-believing scientists look as having an atheistic bent, prompted writing a book The Portraits of the Great Bible-believing Scientists that was published in Croatian and in Serbian languages. Now he has written the same in English, but since many years elapsed from the mentioned publications, he enriched the text with new findings and added 12 new portraits into the book.

Stvarnik Franjo was born in 1942 in Vukovar, Croatia. He received his degree from Faculty of Electrical Engineering in Sarajevo, Bosnia and Herzegovina, the Department of telecommunications, and completed Education studies at Faculty of Philosophy in Sarajevo. Almost the entire working life he worked as a college professor: in Sarajevo until the War in Bosnia, and after that in Calgary, Canada. When working at SAIT in Calgary, as a part of working responsibilities he wrote textbook materials - Test Items for Electrical Fundamentals (ELEC 244) and Electrical Analysis (ELEC 291). For a short period he went back to Sarajevo, and as he worked at Railway School Center, he published textbooks Telecommunication Technique, Pulse and Digital Technique and Digital Telecommunications.