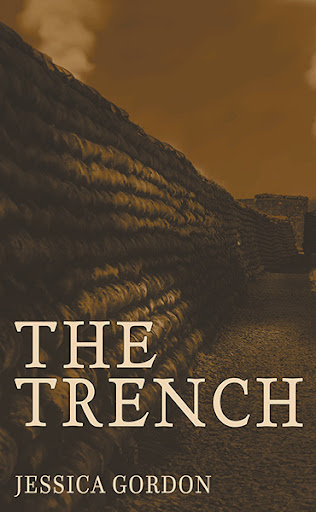 The Trench
by Jessica Gordon

The last thing World War I soldier Sparks and his squad mates remember was being on the battlefield. Now, suddenly, they find themselves waking up in a mysterious trench, with no memory of how they arrived and unabating darkness enveloping them. Still hearing the sounds of battle, but somehow cut off from the world outside the trench, the group of seven fortifies the area as best they can as they hope for help to arrive.

Sparks cannot shake the feeling that something about this place is wrong, that he’s missing something essential. But how can he tell his squad mates, including the stern Sergeant Malks, the aggressive Hendrickson, and the shaken young Cooley, about this lingering dread without sounding unhinged?

Still more lies between Sparks and resolving the mystery of the trench than his apprehension and the unending darkness: a nameless, unspeaking soldier soon joins the squad in the trench, his allegiance unclear, but his eyes telling Sparks he knows something the squad doesn’t.

Blending historical military fiction with suspenseful gothic horror, The Trench will captivate readers with its compelling mystery, haunting atmosphere, and poignant reflections on the nature of war.

Jessica Gordon is a debut novella author with a longstanding interest in history and World War I, and has passionately researched these topics for years. Fascinated by the politics of war, frontline experiences, and the lives of soldiers and their families, Jessica has been writing war stories since high school. She is also a poet, and her poem “A Soldier’s Final Moments” has been anthologized.

Jessica lives in Sudbury, Ontario with her partner and their two wonderful pets: a cat named Bloom and a guinea pig named Chakra.