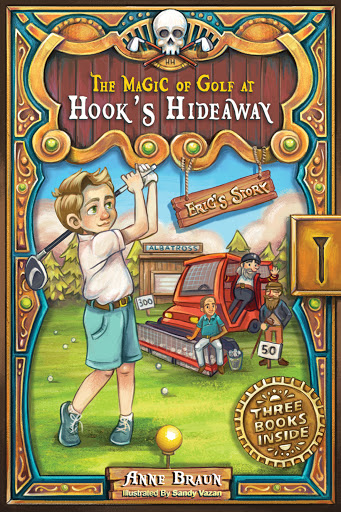 What starts as a visit to a new driving range with Dad, turns into a summer full of the most unexpected adventures. Run and inhabited by a cast of colourful characters, Eric soon discovers that there is something uniquely special about Hook’s Hideaway. With the help of the Golden Keys, he sets out on magical quests through a secret underground tunnel system, where he will learn many amazing lessons about golf, life, and himself.

After working in the corporate world for twenty-seven years, Anne set out on a new path when an opportunity came knocking in 2011. Since then, she has realized her dream of writing a book for each of her children, including the award-winning children’s book “I Dreamed About a Hippopotamus in a Lipstick Factory.” A tireless advocate for children who learn with difficulty, she plans to follow her newfound passion for writing, helping children and families along the way. Anne resides in Oakville, Ontario, with her husband, two children, and their dog Ellie.

Sandy Vazan is a Canadian based illustrator with a passion for telling stories through her paintings. With her training in Fine Arts at the University of Guelph and Interpretive Illustration at Sheridan College, she works as a theme park designer and children’s book illustrator. When Sandy is not working, she is busy exploring the world, tending to her vast indoor garden, cuddling her dog Petey and her black cat Charlie, or cooking up a storm.