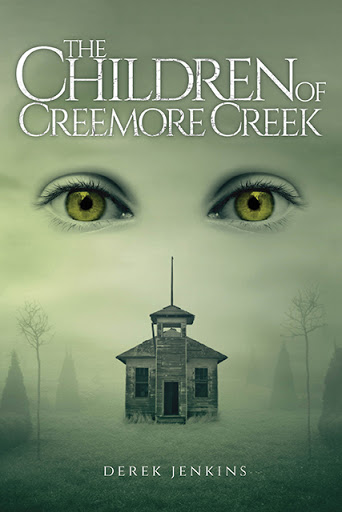 The Children of Creemore Creek
by Derek Jenkins

When four young siblings discover an ancient schoolhouse hidden away in a haunted forest and surrounded by a thick wall of thorny brush, they think it's the coolest thing ever. Then they look through the old windows at a completely empty room, and see footprints start appearing right before their eyes.

Some people would have run for their lives, or screamed, or questioned their own sanity. Not the Jones kids. School was out for the summer, and what could be better than a ghostly mystery to keep them occupied and entertained?

Eager to get to the bottom of it, and to free the spirits trapped inside the school, they enlist the help of a local professor, specializing in supernatural and occult studies, and as the circle of researchers starts to expand, they end up getting much more than they bargained for. They discover that there is far more to the world around them than they had ever even suspected: generations of magical women sworn to protect the world and its peoples; generations of magical men, keeping records of the women's activities; ancient prophecies and prophets, curses and spells, and even a magical pen named Merlin thrown in for good measure.

The Jones kids don't exactly understand it all, or realize how completely their lives are going to be changed when all is said and done, but one thing is very clear: This was going to be an awesome adventure!

Before retiring, Derek Jenkins was a Captain on his local fire department for over 35 years. He worked for a provincial utility for 35 years, where he worked in Emergency Management. From scrutinizing emergency exercises for the Atomic Energy Board to teaching different subjects to emergency personnel and plant general staff, Derek’s life, both at work and at home, was totally emergency driven.

Derek was always fascinated by fantasy writing, especially as it related to children’s literature, and the way it can grab a child’s attention, leading them through a grand adventure. That interest led to him studying children’s literature while in university. Although always wanting to write a book, it wasn’t till he retired that he decided to start his first attempt at creating full-length

children/young-adult novels. A fan of science fiction films, Derek always wondered what it would be like to write a book and have Steven Spielberg convert it to film.

Derek has been married to his wife, Pat, for 44 years. They live in a small Southern Ontario town, and have been blessed with three sons, and seven grandchildren.