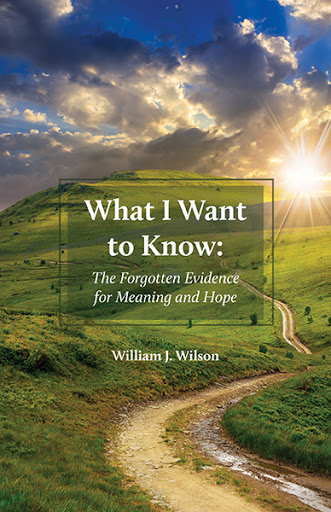 Evidence for Bible, Apologetics, Evidence for God, Is Christianity true, Does God exist, Evolution or creation, Bible vs. evolution

What I Want to Know
The Forgotten Evidence for Meaning and Hope
by William J. Wilson

Christianity began on the margins of the Roman Empire, and is the foundation of Western Civilization. Christianity in the West has provided meaning and hope, social cohesion, a shared world view, and a narrative that makes sense of the world. It has now, for the most part, been replaced by materialism which has no place for meaning and hope, no mechanism to generate human social cohesion and no world but the one in which it is found. It is now time to go back to Christianity and review the things that have been forgotten and that produced meaning and hope. It is time to take seriously the study of Chinese scholars who in pursuing the secret of the greatness of Western Civilization concluded that it was all because of the culture: Christianity. Christianity produced a civilization so successful, so prosperous and so attractive, that people from all over the world have sought to move to a western country to,have "a better life". Unless there is a serious return to an examination of the evidence for meaning and hope in Christianity and a recognition that all that is regarded as of lasting value in life flows from that source, Christianity will continue to fade to the margins and the "better life" that it produced will fade along with it..

Western Civilization was founded on Christianity and it became woven into the social fabric. It emphasized the existence of both a visible world and an invisible world, and was the source of meaning and hope. But that view of life, which was once regarded as absolutely indispensable, has been replaced by the view of materialism or naturalism. This change has found expression in a growing hostility toward Christianity and the suppression of its symbols and traditions.

It is time to review the Christian transcendent view of life. It has been observed that humans cannot live without meaning and hope. If those observations are correct, the worst thing that can happen to a human being is to be without that which gives meaning to life. The questions to be asked are, what view on the nature of reality gives the best explanation for things as they are in the world and what is in Christianity that gives meaning and hope? This book seeks to answer those questions.

Dr. William J. Wilson, graduated from a four year program of theological studies receiving a Dip.Th. He received an undergraduate degree from Wilfrid Laurier University in Waterloo, Ontario, and another undergraduate degree from the University of Manitoba. After further study at the University of Manitoba he received his Masters degree. This was followed by teaching, study and research at the University of Alberta from which he received the Ph.D degree. He is a Canadian historian and has worked in the field of urban history with a focus on the Industrial Revolution. He has taught at the high school and university level and is currently engaged as a writer on subjects relating to Christianity and the modern world. He has written on practical issues involved in the Christian witness among youth in secular society, and on Christianity as the foundation of Western Civilization.