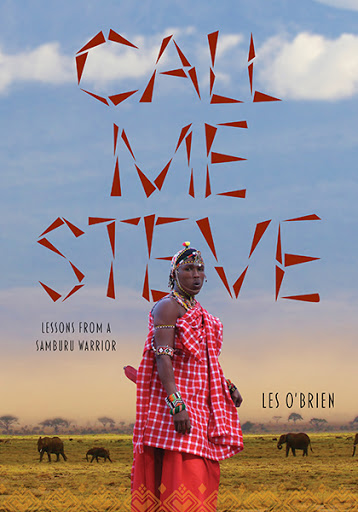 Call Me Steve
Lessons From A Samburu Warrior
by Les O'Brien

“Lengang’arangetengop. At no time in human history has a book started with that name, I bet.”

And so begins the true story of a Calgary man’s life-changing journey to Africa and the start of his life-long friendship with a Samburu warrior with an impossibly long name. On his first day at a Kenyan nature reserve, elephant expert Les O’Brien finds himself sought out by a park guide who is hungry to learn from him. But the tables quickly turn, and soon Lengang’arangetengop – who graciously allows tourists to call him “Steve” and his friends to call him “Tilas” – becomes the teacher. Tilas not only shares his knowledge of his environment and the beauty of Africa with his new friend, he also teaches him about the way of the Samburu – a semi-nomadic people who carry everything they own with them as they travel the African plains. From his new friend, Les learns about loyalty, friendship, responsibility, environmental stewardship, and how to be a better human.

More than a travel book, Call Me Steve is a story of self-discovery and friendship in a land like no other. This book will make you laugh, cry, and then google Samburu National Reserve so you can begin to arrange your own trip there.

Les O’Brien is an elephant consultant (yes, that’s a real job!) who began as a zookeeper and soon became an expert on the “coolest species on earth.” He notes, “I have spent ninety-eight percent of my entire adult life working in the field of elephants in one way or another.” Following his experiences recounted in Call Me Steve, Les opened Tusker Adventure Travel (www.tuskeradventuretravel.com) in partnership with Tilas so that others can experience the transformative nature of the Samburu National Reserve. When he is not leading tours to Africa, studying elephants, or speaking at conferences (about elephants, of course), Les O’Brien lives in Calgary Alberta. Call Me Steve is his first book.