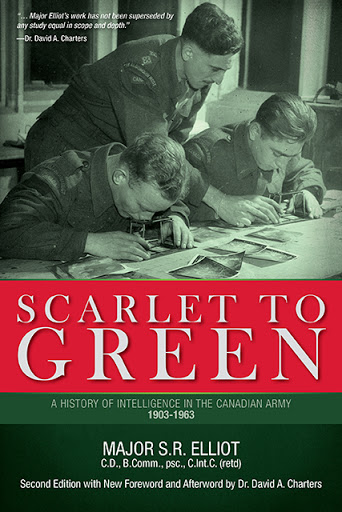 Scarlet to Green
A History of Intelligence in the Canadian Army 1903-1963 by Major S.R. Elliot

Scarlet to Green details the ‘boom and bust’ cycles of the Canadian Army’s intelligence organization from its inception in 1903 to 1963, the eve of the Integration of the Canadian Armed Forces. The book analyzes the role of intelligence in Canadian Army operations in World Wars I and II, and the Korean War, as well as its activities in Canada. The influence of intelligence on operational decision-making, the development of new intelligence collection techniques, and the challenges of countering enemy espionage and subversion are some of the enduring aspects of military intelligence explored. Elliot draws particular attention to the imperatives for having a highly capable and professional military intelligence organization and staff, and shows the challenges when the situation is otherwise, in both peace and war.

With a new Foreword and Afterword by Dr. David A. Charters (Professor of Military History (retd) and Senior Fellow at The Gregg Centre for the Study of War and Society, University of New Brunswick), this second edition commemorates the 35th Anniversary of the Canadian Intelligence Branch, the 75th Anniversary of the formation of the Army’s Canadian Intelligence Corps, and the latter’s formal re-instatement in December 2016.

“Major Elliot’s work has not been superseded by any study equal in scope and depth. It stands as a tribute to the founders and practitioners of the military intelligence craft in its first sixty years in the Canadian Army, and remains a major contribution to the study of intelligence in Canada.”

– From New Foreword (second edition) by Dr David A. Charters, Professor of Military History (retd) and Senior Fellow at The Gregg Centre for the Study of War and Society, University of New Brunswick

“Scarlet to Green will find a respected place in many military libraries around the world, particularly those serving intelligence agencies…. It remains now for an American to set forward with a comparable chronicle of the U.S. Army intelligence.”

“This history will unquestionably become the standard account of Canadian military intelligence up to the era of 1960’s unification. It should serve to spur specialist studies and further materially help to educate historians and the public as to the realities of intelligence.”

“Certainly one of the better and more useful histories sponsored by associations and a credit to its author and sponsors.”

Major Stuart Robert (Bob) Elliot (1922-2015) enlisted in the Royal Canadian Artillery in 1942 before later transferring to the Canadian Intelligence Corps. After completing Japanese language training, he served in the South East Asia Command in India, Malaya and Java (Indonesia). Obtaining a Bachelor of Commerce degree from the University of British Columbia in 1948, his professional career subsequently included joining the Defence Research Board from 1949-52, serving as an intelligence officer in the Canadian Army from 1952-1972 and working as the Information Officer for the London-based International Institute for Strategic Studies, where he was responsible for The Military Balance, until his retirement in 1987. For over 15 years, he intensively researched and wrote the first edition of Scarlet to Green (pub. 1981) in support of the Canadian Military Intelligence Association’s History Project.