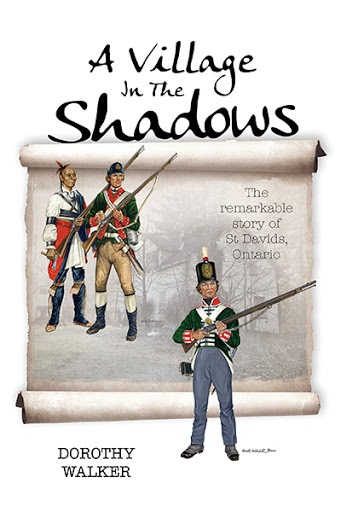 A Village In The Shadows
The Remarkable Story of St Davids, Ontario
by Dorothy Walker

A Village in the Shadows is about survivors from the American Revolution who remained loyal to King George III. At the start of the revolution in 1776, families began to lose their homes, farms and businesses. They wanted to continue their old way of life under the orderly laws and security of the British Crown they had known in pre-revolutionary times. This type of government was being promised in Canada. A British Crown farming/resettlement program was implemented for families to grow grain and raise cattle on the west side of the Niagara River.

Below the Escarpment, on the Niagara Peninsula, a Loyalist settlement developed at the intersection of two ancient Native trails. The settlement eventually became known as the village of St Davids. Its remarkable story started when Loyalist settlers arrived in the early 1780s. They became tenants of the land and laid down new roots. In 1812, they were once again beset by war. They had to defend their families from constant danger and they survived an incendiary attack by American Soldiers in 1814. Once more they had to rebuild their lives and businesses.

Today, St Davids proud history is evident in its heritage homes, churches and burial grounds where many of the graves of the early settlers can be found.

Born in England, Dorothy Walker was educated as an RN and Midwife. Prior to emigrating to Montreal with her family in 1975, she read extensively about southern Ontario, and became interested in the history of the Niagara peninsula.

She studied biology at Concordia University and worked in clinical research with pharmaceuticals, and medical devices that took her to many parts of the world until she retired in 2015.

A Village in the Shadows is the product of a request for Dorothy to update an out-of-print history booklet on St Davids and vicinity. Powered by the love of research, she studied the history of the village and the lives and times of its people over the last 300 years and developed a book-length manuscript.

Dorothy has lived in St Davids with her husband since 2010.