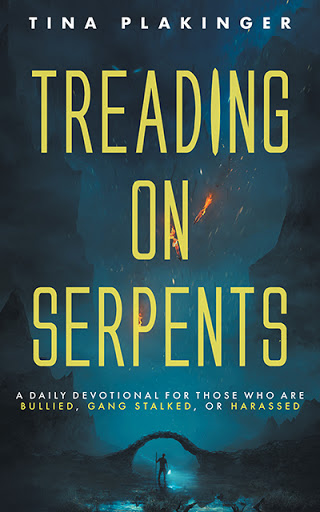 Treading On Serpents
A Daily Devotional for Those Who are Bullied, Gang Stalked, or Harassed
by Tina Plakinger

Do you have the feeling that your every move is being monitored and controlled? Have you encountered signs that your phone, email, and belongings are being tampered with? Is your very sense of reality being undermined again and again by people you are inclined to trust? If so, you may be a victim and targeted individual of gangstalking – a form of organized crime that operates on an insidious level, employing civilians, government workers, and law enforcement agents to coerce people into submission, with the ultimate goal of catalyzing their suicide. For the targeted individuals, death may seem like the only escape from a lifetime of surveillance, psychotronic weapons, remote neural monitoring, mind-games and emotional abuse.

In 2002, at the age of forty-three, the world-famous former bodybuilder Tina Plakinger was uprooted from her North Hollywood lifestyle and has spent seventeen tumultuous years dealing with gangstalkers. In Treading on Serpents Tina offers an invaluable resource for targeted individuals. There is a passage of affirmation for every day of the year, coupled with scripture readings and empowering prayers. Having experienced firsthand the hidden wounds of forced isolation, lack of privacy, and psychological torture, Tina’s honest and loving words inspire us to recognize that if we’ve been targeted by hate groups, suicide is not an option, and that such tragic deaths can be prevented. In order to survive gangstalking, one must suit up for the spiritual warfare that it is. Tina shows us how to avoid suicidal thoughts and achieve peace, all while surviving as one of God’s Chosen Ones.

Tina Plakinger is an author and former World Champion bodybuilder. In the 1980s, she was celebrated as an entertainer and trendsetter, having received awards for both “Best” and “Most Unique Poser” in the professional ranks of women’s bodybuilding. In addition to competing and guest posing, she privately trained Warren Beatty during the filming of Dick Tracey and worked as a spokesperson at U.S. military bases for Joe Weider’s Muscle & Fitness products. Tina’s work extended into television and film, as she starred in Pumping Iron II: The Women; played a recurring role in General Hospital; and had a supporting and stunt role in Armed & Dangerous (1986). As an avid and experienced writer, Tina freelanced for multiple publications, including Muscle & Fitness Magazine and Muscular Development Magazine. She also coauthored a monthly column with Dr. Franco Columbu in Flex Magazine. Tina featured the current whereabouts and lives of former champion bodybuilders for Iron Man Magazine in her monthly column Whatever Happened to…. She also received screenwriter credit for scenes in the motion picture, Liberty & Bash, starring Lou Ferrigno.

But that all changed in 2002, when Tina became a targeted individual within a nationwide underworld of gangstalking networks. She was coerced from her North Hollywood home to the South Bay area, where she lived in community-enforced isolation. She eventually managed to escape in a stolen car with only her two dogs. She is a survivor of smear campaigns, legal corruption, oppression, thievery rings, and satanic worshiping. Treading on Serpents is her first book, aimed at supporting other targeted individuals. The sequel is forthcoming. Tina Plakinger can be contacted at www.tinaplakinger.com.