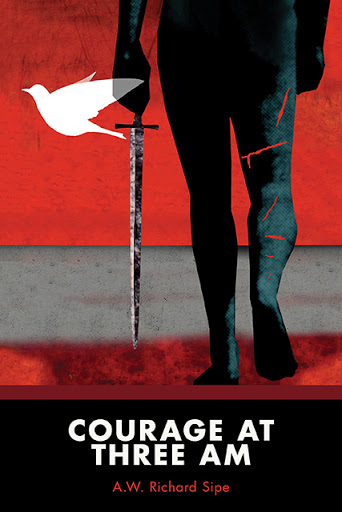 Courage at Three AM
by A.W. Richard Sipe

Who among us is ready to face death with eyes and heart completely open? Who among us is ready to account for all that we have said and done, for all our battles lost and won? Who among would have the courage to pause at the very fulcrum of life and death and carefully consider whether it is time to lay down one’s shield and fall upon one’s sword, or pray for “Galahad’s strength of ten” and fight again?

In these poems of hope, reflection and spirituality, Richard Sipe endures a dark night of the soul and lingers there, daring darkness to overwhelm him and spare him yet another battle, while trying to believe in one more dawn. “What fool can stand, wrestle the demons from the deep, and hope to live, survive, un-mutilated?” he complains.

But the answer is Sipe himself, as he recalls the dream childhood, a dance with the devil and a path to the divine through sensuality and the ceaseless tests of maturity. Summoning the courage to stand at his own graveside, he reviews his scars, his imperfections and his faults with uncommon candor, concluding, “Truth alone will honor what I’ve been or done.”

A.W. Richard Sipe—mentor and champion for victims of clergy sexual abuse—records here, as he did in his prior volume I Confess, his wrestling with personal demons and angels, ones that occur behind the veil of the man we all see.

Courage at Three AM says, simply, I am human, a man. I have lived life’s paradoxes, its arrows of broken integrity and its abuses of soul and meaning which, over time, demand a hearing by haunting the 3AMs of our waking dreams. Like Judas we all face the challenge of transformation, resolution and reintegration of our paradoxical parts.

The courage needed to dance with the 3AM muses, is the same required for the realization and acceptance that we need someone to tell us “one more time” that we are loved and were born to be loved…. not abused, forgotten or caste aside.

Courage at Three AM teaches us that our scars of inner conflict are not to be feared, covered up, lied about or air-brushed away. Rather, our collective and individual scars need to be embraced because they are our own essential life-marks that identify who we are, collectively and individually.

A.W. Richard Sipe began writing poetry after his 80th birthday. Unintentionally, that production, entitled I Confess, turned out to be the beginning of a memoir that reflected his concurrent work in psychoanalysis. Courage is the continuation of his earlier process. It reflects his deep commitment to the years of struggle with the sexual problems of the Catholic Church, specifically advocating for those abused by bishops and priests.

All of Sipe’s experiences and struggles are reflected in the pathos and promise of his poetic outpourings. His gratitude to his friends is a major factor in his ability to continue his work and scholarship. His wife of 47 years, Marianne Benkert, a psychiatrist, and their son Walter, also a psychiatrist, have shared some of the same interests and commitments. He and his wife are now retired in La Jolla, California.