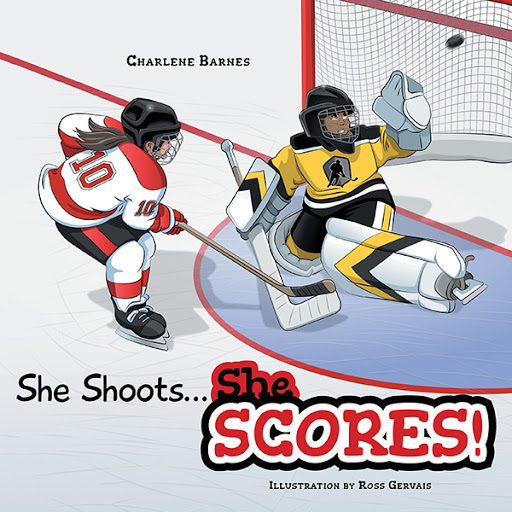 She Shoots...She Scores!
by Charlene Barnes

Canadians have been playing hockey for generations, with excited little boys being driven to their local arenas over and over again, at the crack of dawn, by sleep-deprived parents who just want them to be happy. After all, hockey is the most exciting and Canadian sport there is!

But who said it was just for boys?

More than ever, little girls are getting in on the excitement, proving to their brothers and fathers (and themselves), that they are every bit as fast and skilled as the boys—and enjoying every minute of it!

With this, her first published children’s story, Charlene Barnes celebrates these young female hockey players, in rhyme, as they take to the ice, make friends, and play the game that she has grown to love.

She offers you She Shoots... She Scores!

Although Charlene is the only non-hockey player in her household, she has gained a real appreciation of the sport while watching her children grow and develop as hockey players over the last four years, as well as by becoming a part of the ‘hockey parent’ community, with all the driving, fundraising, and early-morning practices that such a membership entails. Just like their children on the ice, these hockey parents have forged friendships that are likely to last forever.

Charlene was born and raised in Newfoundland and is now living in Carleton Place, Ontario, with her husband, Mark, an avid Ottawa Senators fan, and her two wonderfully talented, hockey-loving children, Mackenzie and Brady.

She Shoots...She Scores! has been nominated by our staff as one of their favorite books.