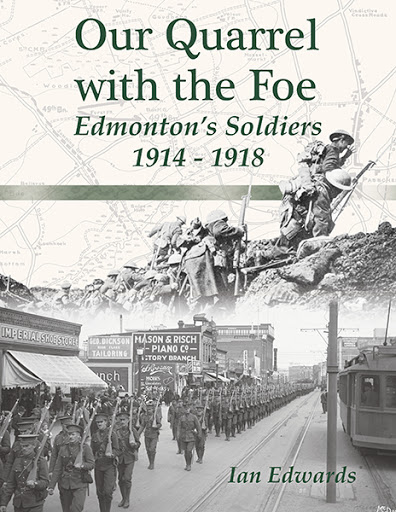 After the terrible poison gas attack in the Ypres Salient in April 1915, Canadian medical officer John McCrae made a plea to his nation in his poem, “In Flanders Fields”, to hold the torch from fallen hands and take up Our Quarrel with the Foe.

Inspired by McCrae’s words, author Ian Edwards, a historian with The Loyal Edmonton Regiment Military Museum, dives into the early story of the Edmonton area Canadian Militia and its preparation to stop the aggression of the Central Powers of Europe. He follows the new Edmonton units, cavalry and infantry, as they came together as comrades within their own unique battalions or regiments of the Canadian Expeditionary Force. Edwards reveals their difficulties and successes with recruiting volunteers, mastering command and control, and adapting to new tactical skills, weapons, uniforms, and equipment. Most Edmonton region units were only to be broken up in England, parcelled out as replacements for the fallen Albertans. While other units supplied timber or laid rail lines to permit Allied Powers advances, medics from Edmonton collected and dressed the wounded soldiers of the infantry at the front line.

The Canadian Corps suffered atrocious losses at Ypres, the Somme, Vimy, Passchendaele, and the highly successful but costly Final 100 Days Offensive in 1918. Units, with high proportions of Northern and Central Albertans, had triumphs and failures. The gallantry of individual soldiers and unit battle honours paints the picture of their heroism while taking up the quarrel in the First World War.

Ian Edwards joined The Loyal Edmonton Regiment in 1959. He served in the ranks for ten years. As a sergeant he was a rifle platoon 2ic, company quartermaster sergeant, and battalion orderly room chief clerk. He was a second lieutenant and quartermaster of The Queen’s Own Cameron Highlanders of Canada. As a captain, he commanded army cadet corps of both regiments. Ian graduated from the University of Alberta in 1972 with a Bachelor of Commerce degree. He has collected Canadian Army insignia since 1970, and was elected honorary life member of the Military Collectors’ Club of Canada in 2018 for his decades of service on the Club’s national and local executives. Ian was the editor of the Forty-Niner magazine from 1995 to 1997, and a volunteer at The Loyal Edmonton Regiment Military Museum since 1998. Ian was presented with the Canadian Forces Decoration in 1974 and the Alberta Centennial Medal in 2006.