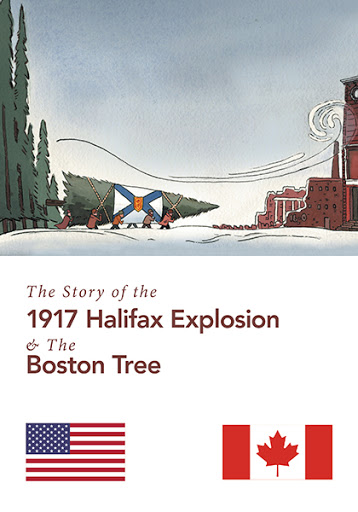 At 9:06 in the morning of December 6, 1917 in the City of Halifax, Nova Scotia two ships collided. Minutes later there was an apocalyptic explosion followed by a blizzard of flying glass, splintered wood and white hot metal falling from the sky. In an instant almost 2,000 people lay dead and another 9,000 wounded and thousands left homeless.

This set in motion the greatest rescue mission ever known at the time between the United States and Canada. Within hours, without authority or hesitation the City of Boston and the State of Massachusetts pulled together all their medical resources and went to the aid of Halifax.

This is the story of unprecedented compassion, mercy, and heroism. It speaks of the eternal friendship and helping hands across the border between the State of Massachusetts and the people of Nova Scotia.

This humanitarian rescue mission was never forgotten. Every year a special thank you gift is sent to Boston from the people of Nova Scotia. This gift symbolizes peace on earth, hope and light in the darkness..... a giant fifty foot Christmas tree!

“The Evidence is clear that in the direst of circumstances humans go to the assistance of others. That is the story told here. This is a story of heroism and gratitude in the context of the largest man made explosion in human history before World War 2. This was an explosion that reduced a good portion of the city of Halifax to rubble and killed or injured thousands of its citizens.

Suzanne Pasternak has written a compelling and compassionate story about the Halifax explosion of 1917 and the long tradition of gratitude it set in motion. It is important that in these times to be reminded that humanity embodies rich reservoirs of goodness and kindness and the spirit to do the right thing. Read it aloud, and read it again and share it widely. It is a story for all ages.”

Suzanne Pasternak is a writer of literary nonfiction, a composer, playwright, musician, producer and storyteller. Her body of work is steeped in the history of both the United States and Canada. Her creations speak to young and old alike, making history come alive through writing, musical productions, songs and storytelling. Suzanne is a former resident of Cape Cod, Massachusetts and Halifax, Nova Scotia. She now divides her time between Wolfe Island and Prince Edward County, Ontario.