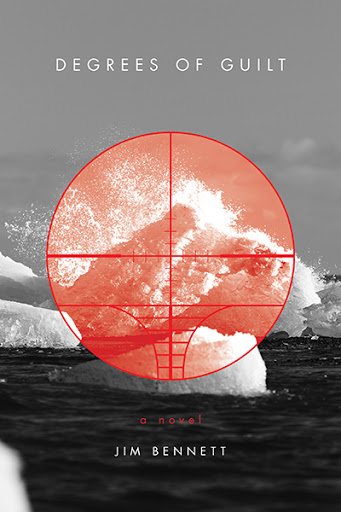 Degrees of Guilt
by Jim Bennett

When a helicopter chartered by an anti-seal hunting group buzzes his boat off the coast of Newfoundland, Billy Wheeler downs it with a single shot, killing everyone on board. As his crewmates reel from shock, one thing becomes irrevocably clear: Billy is deep in the throes of PTSD (Post-traumatic Stress Disorder).

Born in a fishing village in northern Newfoundland in 1967, the last thing Billy thought he’d become was a soldier. With few career options available due to declining fish stocks, he joins the Canadian Armed Forces. Canada isn’t at war with anyone, so he never considers the possibility of combat. His deployment on a peacekeeping mission to Bosnia changes that. There he witnesses the ravages of ethnic cleansing and engages in the savagery of war, discovering an unparalleled propensity for killing.

Billy’s “success” at war comes at a price—horrific images that threaten to overwhelm his mind. Though he tries to hide his condition and self-medicate, the consequences are predictable. When a personal tragedy turns his world upside down once again, he turns to the one thing he knows best: combat. The mission in Afghanistan is a success, but his PTSD symptoms return with a vengeance, leading to that terrible day off Newfoundland’s coast.

What emerges is a gripping portrait of one soldier’s battle with PTSD, a region’s struggles with the trauma that follows the loss of its central industry and way of life, and a story of family, loyalty and finding love when you least expect it.

Jim Bennett was born in Daniel's Harbour, Newfoundland. Upon graduating from Memorial University, he joined the financial planning industry. After an award-winning, fifteen-year career in Newfoundland, Nova Scotia and Alberta, he entered law school, graduating with an LLB from Windsor and a JD from Detroit.

He practiced law, mostly contested matters, in Ontario until 2002, when he returned home to Daniel's Harbour and opened a law practice.

In 2011 he was elected to the Newfoundland and Labrador House of Assembly where he served for four years. He did not run for re-election in 2015.

Today he writes and practices law. Jim is married to Ontario resident and former Cabinet Minister Sandra Pupatello and divides his time between both provinces. Degrees of Guilt is the first of what he hopes to be a series of novels that allow readers to explore human motivation through the world of fiction, often set in Newfoundland.