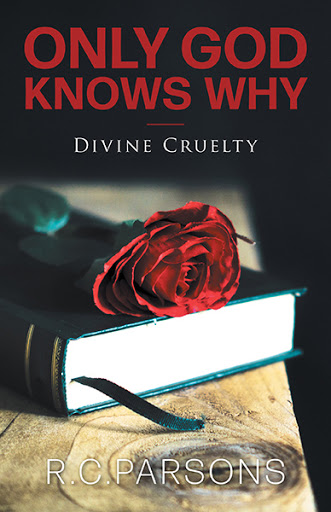 Only God Knows Why
Divine Cruelty
by R.C. Parsons

Glancing ‘round the kitchen, I decided to make the most of my unexpected holiday. Instead of dressing for work in my drab olive-green Get Go outfit, I walked into the bedroom and grabbed a pair of faded old blue jeans and a white summer tank. I steered my butt into the bathroom and stood silently, questioning my appearance in the mirror.

I’m forty-six years old, and all this shit’s making me look like sixty.

Grabbing my makeup bag, I did a quick Chinese slap-chop-suey on my face, finishing up with a lick of Latin lipstick.

Ahhhh, not so bad with the cover-up.

Gee, I seem to have dropped a few years.

Laughing as I slipped my boots on, I tossed my old leather jacket over my arm for later and decided to head down to the local watering hole.

It was more than a tweak funny to me that the bar I was planning on kicking it in was the Get Together. It was an amusing coincidence considering the bullet I was dodging for the day was none other than the local Get Go. The bar had a long, sordid history on Kenilworth Ave. It was opened and closed by the local cops at least twice a year, a ripper bar when I’d begun shooting a stick at the tender age of eighteen.

By the ripe age of twenty-four, I’d graduated up to serving beers and waiting tables, and it’d evolved into one of the roughest biker bars in Hamilton. Hells Angels, Red Devils, Outlaws, and the Chinese Tong all left their colours and turf wars outside to discuss business around the marble bar top. Once that was done, they’d slip down to the private “gentlemen’s” room to shake hands over a few rails of the Christmas product they all pumped out on the streets.

Walking down the street now, kissing fifty, I found myself running there for shelter.

Shelter from work, from life, from a man I used to love and a house I used to call home.

Looking down along the long, wooden hallways upon a distant green and jaded lass