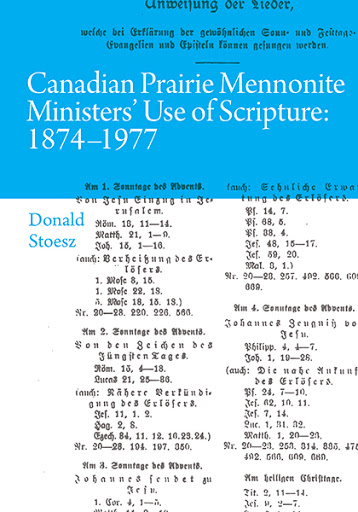 A chance discovery of a log book of sermons by grand-uncle and Evangelical Mennonite Mission Conference minister Cornelius G. Stoesz led Donald Stoesz on a fifteen-year odyssey in which he identified four hundred and fifty-seven Scripture texts used by seventeen Mennonite ministers in Canada over the course of one hundred years (1874-1977).

The extensive, yet selective, use of the Lutheran lectionary by these ministers illuminates an aspect of Mennonite church life that has seldom been recognized. Known as the Anweisung der Lieder and located at the front of the German-language hymnbook (Gesangbuch), this lectionary was in use by Mennonite congregations in the 18th and 19th centuries in Prussia and Russia. Stoesz details Scripture usage and arranges sermon texts according to method of selection and topic. Included in this analysis are biographies of three pastors and several translated sermons from 1 Peter.

“This work will be of interest to historians, theologians and pastors in that it revises previous assumptions about the relationship between lectionary usage and Mennonite practices. The book is also important in that it illuminates pastoral and theological content as it relates to themes such as evangelism, discipleship, and church membership.” Karl Koop, Professor of History and Theology, Canadian Mennonite University

“Donald Stoesz has done a masterful job of showing how the subjective aspects of more pietistic ecclesial bodies such as the Mennonites are helped by the stability of the objective aspects of faith as manifest through their use of a lectionary.” Father Michael Averyt, Director of the Formation Program for the Permanent Diaconate, Roman Catholic Diocese of Prince Albert, Saskatchewan

“Each week Christians gather to hear the good news from pulpits around the world. For centuries encouragement, admonishment, teaching, proclamation, and storytelling have been organized around biblical texts known as a lectionary, which has been commonly used across denominations, continents, and over time. Donald Stoesz’ research shows how the Mennonite church has carried on this tradition. Stoesz' research uses archival sources in a way never done before.” Conrad Stoesz, Archivist, Mennonite Heritage Archives, Winnipeg, Manitoba

Rev. Dr. Donald Stoesz grew up in the Mennonite community of Altona, Manitoba and became a member of the Bergthaler Church as a teenager. After many years of study at Canadian Mennonite Bible College and Associated Mennonite Biblical Seminary, ministry in Calgary Foothills Mennonite Church, graduate studies at McGill University, prison chaplaincy in Quebec and Alberta, Donald Stoesz has returned to his Sommerfelder roots with this historical study of a century of Scripture texts used by Mennonite ministers on the Canadian Prairies. This church history project has mushroomed into a sociological analysis and theological treatise about Mennonite worship and faith more than a century ago.