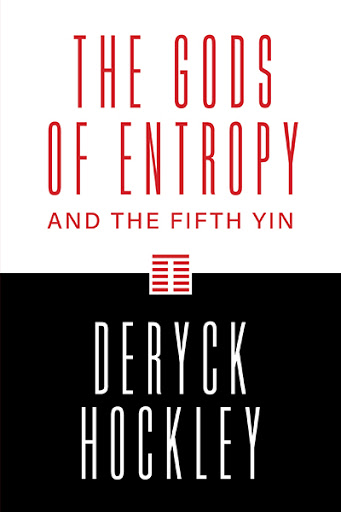 The Gods of Entropy
and the Fifth Yin
by Deryck Hockley

The Gods of Entropy and the Fifth Yin follows Dyfed Lucifer, the only descendant of the multi-dimensional “Hyperborean Masters of the Little Known Universe” to be born on an “earth” that has a history remarkably similar to ours. His mission is to reduce the suffering of humans (the hoi polloi – the fuzz on the peach and the salt of the Earth) and give them the tools to think independently.

Standing in the way of Dyfed’s mission are the Haploids, the world’s executive power elite who captain almost every ship of state. These Haploids are the acolytes of myth and responsible for cults, political ideology fallacies, and a corporate establishment that keeps the hoi polloi slaves to debt. Thankfully, as an immortal, Dyfed has time on his hands for this epic quest that extends from early history to a gloomy future that (despite the author’s disclaimer) bears a striking resemblance to the world at large today.

Witty, sagacious, and downright spicy, The Gods of Entropy combines satire and surrealism to hold a mirror up to our own civilization that will make readers alternatively chortle and gasp, and most importantly, reflect.

Deryck Douglas Hockley is an engineer by trade, and a writer, poet, artist, and philosopher by choice. He is also a self-confessed amateur historian and theoretical “conspiracyist”. (The latter of which he points out is someone who collects and analyzes conspiracies rather than one who is involved with conspiracy mongering.) Deryck believes humanity’s semi-permanent predicament of ignorance, fear, and hatred is the effect of religious-historical myths created out of false ideas and taken out of context. As such, his mission is “to enact some subterfuge that can help all people, everywhere, to ignore the path of least resistance in this world, shun senseless wealth and egotistical ceremony, and instead fight for the right to flex their own personal expressions of their individuality.”

In addition to pursuits of the mind, Deryck enjoys most anything outdoors. His interests have included extensive mountaineering, motorcycling, and boating. He is a husband and a father, and especially, a friend of dogs and other gentle animals. Deryck lives with his wife on Pender Island, British Columbia. The Gods of Entropy is his second book.