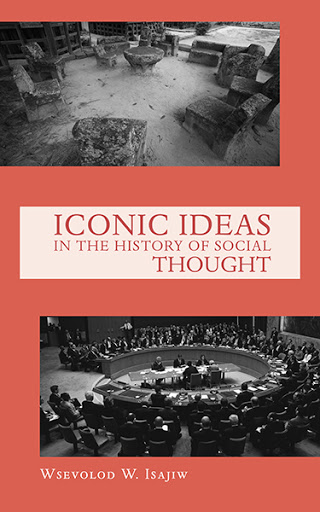 Iconic Ideas in the History of Social Thought
by Wsevolod W. Isajiw

The book distinguishes a number of types of social thought and traces their history from “tribal” times until present day. It shows that human beings thought systematically about their societies very early in their development, even if only informally, as they did not write treatises about them. In many ways, they formed a basis for all social thought that followed.

The book discusses the social thought of ancient civilizations and talks about how the rationalism of Greek and Roman times and the religiosity of early and later Christianity influenced its development.

The book then explains the influence of the Reformation, the change of the intellectual climate and the emergence of new approaches to the discussion about the nature of society. It talks about the theorists who argued that societies were created by social contract among people and some, like the colorful Robert Owen, advised that we should learn by doing. He tried to establish two colonies in which people would work and live together and share the products of their work among all in the colony. This was a benign socialist idea. It did not work. But soon the aggressive socialism of Karl Marx and his followers emerged.

A strong trend emerged in the meantime for the scientific study of society, employing all the methods of the natural sciences. Sociology as a professional discipline thus developed. An issue emerged whether society is just a congregation of individuals or has a reality of its own. Differences among scholars emerged with American sociologists favoring individualistic sociology and Europeans favoring the reality of society approach. But the contest was crowned by Max Weber, whom some consider to be the greatest sociologist who ever lived, and his “analytical” and “verstehende” sociology. The field of sociology has spread out widely into various specializations.

Wsevolod W. Isajiw is Professor Emeritus of Sociology at the University of Toronto. He was educated at LaSalle College, The Catholic University of America, from which he holds his MA and PhD degrees and at Harvard University. His field of study is Sociological Theory and Ethnic and Race Relations. He taught History of Social Thought and Ethnic and Race Relations courses and was engaged in empirical research for about forty years. His publications include Causation and Functionalism in Sociology (1967), Ethnic Identity and Equality (1990), with 3 co-authors, Understanding Diversity: ethnicity and race in the Canadian context (1999) and other. His much reprinted articles include “Definitions of Ethnicity”and “Olga in Wonderland: ethnicity in technological society”. Wsevolod Isajiw is married and has four adult children and three grandchildren.