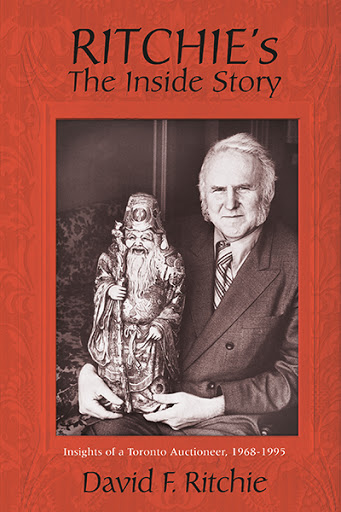 Ritchie's: The Inside Story
Insights of a Toronto Auctioneer, 1968-1995 by David F. Ritchie

This insider’s guide tells how David F. Ritchie founded and developed Ritchie’s, achieving national and international recognition for skill, reliability, and service as auctioneers and appraisers. Ritchie reminisces about the firm’s struggles and successes and about prominent Canadians whose collections his firm sold. “In this business, one never graduates.”

Allan Fotheringham, from the foreword:

"With Mr. Ritchie at the helm, one had a history lesson on every object or artwork that came up for sale. It led to some very long auctions...but everyone came home full of knowledge and with something under their arm to justify the excursion...In reading the book, one can see the development of the art auction business in Canada...Enjoy the read. I sure did."

Margaret McBurney, author and historian, former president of the Arts and Letters Club of Toronto:

"Ritchie's: The Inside Story celebrates the demanding and creative determination that resulted in a successful enterprise, and provides a delightful, insightful look at stories untold until now."

David F. Ritchie gravitated to the auction business naturally, having grown up in New Brunswick with parents who owned antique Eastern Seaboard furniture, and hung paintings by Jack Humphrey and Julia Crawford on their walls. After a WWII tour as a Spitfire pilot with the Royal Canadian Air Force and the Royal Air Force, he completed degrees at the University of New Brunswick and Case Western Reserve University, then went into publishing and public relations.

D & J Ritchie Auctioneers and Appraisers, later shortened to Ritchie’s, was established in Toronto in 1968 and instituted many innovations to become a leader in the field across Canada and abroad.

After retiring in 1995, Ritchie embarked on a number of summer mountain bike trips in Europe. He enjoys the fellowship of the Arts and Letters Club and writes about his air force flying and auction experiences. His home is filled with family heirlooms, and the antiques and art he still can’t resist collecting. He entertains his friends with tales of the auction days.

Bound copies of Ritchies’ catalogues can be found in the Toronto Reference Library.