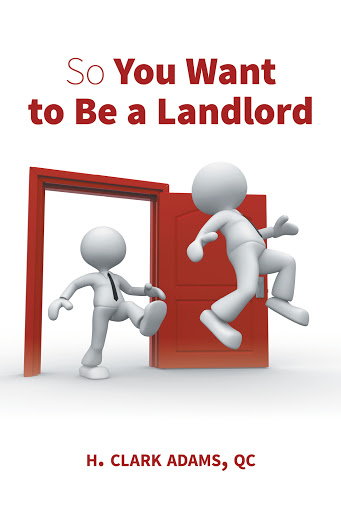 So You Want to Be a Landlord
by H. Clark Adams, QC

A warning to those who are considering becoming landlords: investing in rental property is far from a bed of roses!

This useful handbook has over thirty cases, documented over years of experience, which illustrate some of the difficulties that landlords face in their relationships with their tenants. So You Want to be a Landlord explores the trials and tribulations of a landlord just trying to do his job. While his accounts are not designed to condemn all housing tenants, this book, he hopes, will serve as a great resource to all prospective landlords, exposing as it does many of the pitfalls that they may encounter.

Case history confirms tenants’ rights and the imbalance that favours tenants over landlords. With over forty years’ experience as a commercial landlord and fifteen years as judge in a small claims court, Judge Adams relays a number of stories that were told under oath, and which will act as an invaluable source of information to any would-be landlord.

With a lifetime of experience as a residential and commercial landlord, and his appointment as a small claims court judge for fifteen years, Judge Adams decided to share his extensive experience by writing a book designed to make all prospective landlords fully aware of the pitfalls that lie ahead when venturing into the property market.

A graduate from Ontario Agricultural College and later Osgoode Hall Law School in Toronto, Canada, Adams was called to the Bar in 1960. After many years of practising law, he moved on to become a judge in a small claims court. In 1997 he was awarded the Bicentennial Award of Merit of the Law Society of Upper Canada “for meritorious contribution to public service in his community, and in recognition of his numerous accomplishments, which have worked to enhance the good works of lawyers in society”.

Judge Adams resides with his wife Jane and enjoys writing. Although he devotes much of his spare time to travelling, he relishes the time he spends with his grandchildren and attending symphony concerts. He hopes that the information he has provided will serve as an invaluable source of reference and help inform would-be landlords of the many pitfalls that exist within the profession.