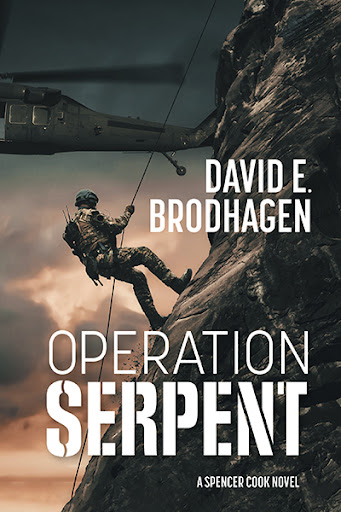 Spencer Cook is a typical, fun-loving teenager . . . until a senseless act turns his life upside down: a bomb explodes and leaves his father clinging to life, permanently paralyzed.

Hurt, confused, and angry, Spencer joins the military to fight terrorism. He soon finds himself in a race against time to stop the world’s most feared terrorist, Mohammad Hassan. Embarking on a worldwide chase to prevent future atrocities, Spencer must confront not only chilling acts of terrorism, but his own internal demons.

A tense, high-stakes military thriller, Operation Serpent offers an unflinching look at hatred and the deep effects of terrorist acts.

David E Brodhagen has written for Breakthrough Magazine, African Hunting Gazette, and other sporting magazines. Having travelled extensively in South Africa and Namibia, he is the author of Hunter's Handbook: A Guide for Trophy Hide and Meat Care. He lives in Cambridge, Ontario, with his wife, Lynda Lou, and their demanding pooch, Lexi.