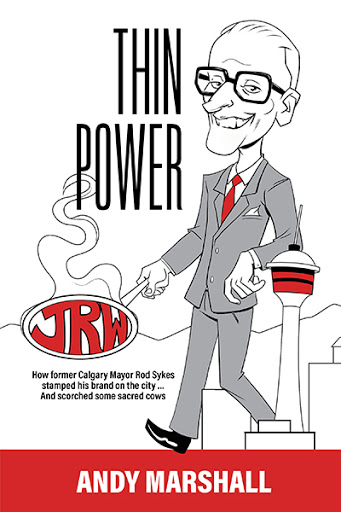 Thin Power
How former Calgary Mayor Rod Sykes stamped his brand on the city . . . And scorched some sacred cows
by Andy Marshall

Thin Power is the unauthorized biography of former mayor of Calgary, Rod Sykes, featuring the achievements and bitter controversies of his eight-year term ending in 1977. Publicly revealed for the first time are details of Sykes' unorthodox upbringing in Victoria, B.C., his rise to the mayoralty, and his doomed attempt at provincial politics as leader of the Alberta Social Credit Party in the early 1980s. It offers an entertaining look into a fascinating era of growth and change in the history of Calgary and Alberta, and takes the reader up-close to the successes and failures of one of the nation’s most divisive politicians. Sykes' friendship with prominent former leaders including Prime Minister Pierre Trudeau and Alberta Premier Ernest Manning are explored in detail. His fractious relationship with Alberta Premier Peter Lougheed, and his strange connection to British royalty are also examined. The gall and the guts of this stick-thin politician in a grey suit will amaze modern readers, just as it did those who watched as he single-handedly transformed Calgary’s political landscape.

Andy Marshall served as a staffer for part of Rod Sykes’ term as mayor of Calgary, and later for his stint as leader of the Alberta Social Credit Party. He spent two decades as a reporter and editor with Alberta dailies, which gave him an inside look at the prominent political figures Sykes interacted with.

He was born in England and holds a degree in German from the University of Durham. After immigrating to Canada in 1965, he has spent most of his life in Alberta. He lives in Cochrane, west of Calgary, with his wife, Chris. In retirement they enjoy spending time with their two sons, two daughters, and three grandchildren. This is his first published book.